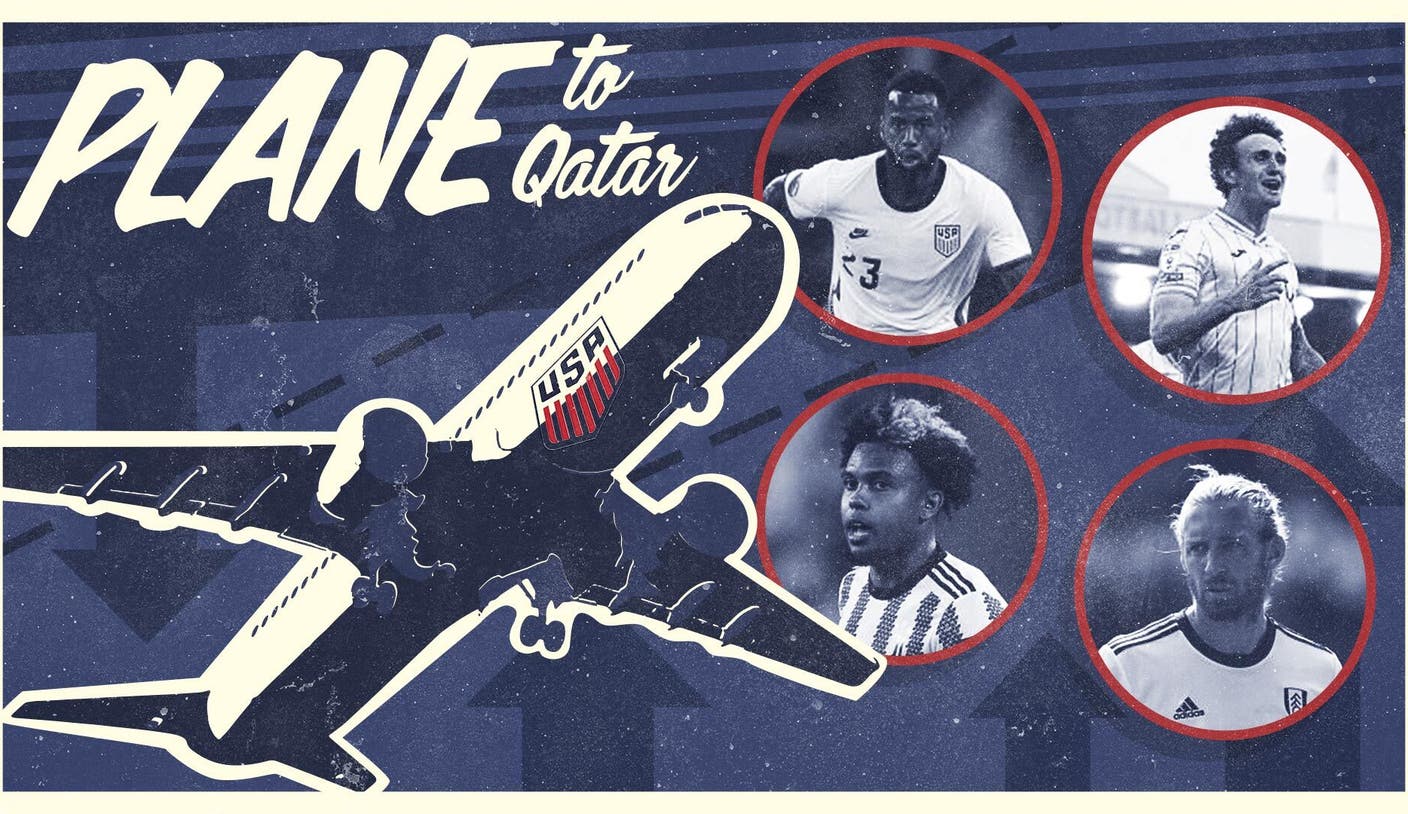 World Cup 2022: Malik Tillman pleads for a place on the plane for Qatar

Editor’s note: “Plane to Qatar” is FOX Sports’ weekly feature that tracks the progress of players hoping to crack the United States The roster of 26 men’s national team players for the FIFA World Cup 2022 in Qatar.

It’s going to be fascinating to see how this list changes over the next few months.

Injuries, transfers and fluctuations in form are sure to move the roughly 40 members of the USMNT player pool vying for a spot on Gregg Berhalter’s World Cup squad in and out of the race. Things are already happening. Malik Tillman has scored twice for Scottish club Rangers since Plane to Qatar made their debut last week, and few more names have been added since then as well.

First, Joe Scally. The versatile rear should have been included originally. Then again, Scally is still a long way from qualifying for the World Cup despite starting the first two games of the season for Bundesliga side Borussia Monchengladbach.

Scally is likely fifth on Berhalter’s right-back depth chart, with Sergiño Dest, DeAndre Yedlin, Reggie Cannon and Shaq Moore (who also should have been mentioned last week) ahead of him. Scally wasn’t great on the left in June’s friendlies against Morocco and Uruguay. the coach always seems more inclined to move Dest to the left should anything happen to the Jedi Robinson starter.

Midfielder Djordje Mihailovic is back in fine form, and two strikers have won at the top of the basket. One is Matthew Hoppe, who made his debut for English Second Division side Middlesbrough on Sunday following his transfer from Mallorca, for whom he played just 169 minutes in 2021-22.

The other is Jozy Altidore, 32, a two-time World Cup participant, who scored his first goal since joining Puebla in Liga MX on Friday:

Could Altidore fire a Herculez Gomez, whose out-of-nowhere goal streak for Puebla in early 2010 earned him a trip to the World Cup of the year in South Africa? Keep checking this space. Things can change quickly.

M Tyler Adams (LEDs): Ditto for defensive midfielder Adams. Next up for Leeds is Chelsea on August 21.

D Sergino Dest (Barcelona): Dest didn’t dress for Barca’s scoreless draw with Rayo Vallecano. He is wanted by his former Ajax manager Erik ten Hag, now at Manchester United, but would prefer to stay at Barca. Will he play if he does?

F Jesus Ferreira (dallas): The 21-year-old striker has scored consistently all season. On Saturday, he added two more goals, taking his tally to 14.

M Weston McKennie (Juventus): In perhaps the best USMNT news of the weekend, McKennie started Juve’s season-opening Serie A win over Sassuolo after recovering from a shoulder injury earlier provided that.

M Yunous Musah (Valence): The 19-year-old made a strong start to the new La Liga campaign, spending 90 minutes in Sunday’s 1-0 win over Girona.

F Christian Pulisic (chelsea): Pulisic came off the bench for the Blues for the second game in a row. He should see more playing time when the Champions League group stage begins next month and manager Thomas Tuchel is forced to rotate his formation. Otherwise, there are reports that Newcastle United have inquired about the 23-year-old.

Would USMNT’s Christian Pulisic be a better fit for Newcastle? | State of the Union

USMNT midfielder Christian Pulisic was lightly introduced to Chelsea over the weekend as rumors swirled of a move to Newcastle. Alexi Lalas and David Mosse discuss his potential suitability for the club.

*F H John Reina (Borussia Dortmund): An unused substitute in BVB’s opener, Reyna, who missed most of last season due to hamstring problems, wasn’t even on the Dortmund bench for her second game.

D Antonee Robinson (Fulham): Jedi went 90 for the second week in a row as Fulham remained unbeaten in their return to the Premier League.

*F Tim Wea (Lille): A foot injury should sideline Weah for the next few weeks. He could then have a new club, with Valencia reportedly eager to loan the 22-year-old winger out.

D Walker Zimmermann (Nashville): The USMNT’s top centre-back made his 22nd start of the MLS season in Sunday’s 2-1 loss to Minnesota United.

M Kellyn Acosta (LAFC): The Adams understudy has made eight consecutive starts for the top team in MLS.

M Luca de la Tour (Celta Vigo): The 24-year-old playmaker didn’t come off the bench in Saturday’s 2-2 draw with Espanyol. He could make his La Liga debut next week against Real Madrid.

D Aaron Long (New York Red Bulls): He started long in all four June games for the United States. How much he plays in September’s friendlies against Japan and Saudi Arabia will be telling.

M Jordan Morris (Seattle Sounders): His numbers are down slightly from 2020 and 2019, his last two full seasons before a torn ACL cost him most of 2021. Morris is still likely to be successful barring injury, especially with three more places available .

F Jordan Pefok (Union Berlin): Pefok was held scoreless by Mainz a week after scoring on his Bundesliga debut with a goal.

D Tim Rame (Fulham): The veteran left-footed centre-back has been superb for the second week in a row, helping the Cottagers keep a clean sheet against Wolves.

M Christian Rollan (Seattle Sounders): If Tillman succeeds, it could come at the expense of the 27-year-old.

D chris richard (crystal palace): The lanky centre-back made his Premier League debut on the bench on Monday in Palace’s 1-1 draw at Liverpool.

F brandon vazquez (Cincinnati): Another week, another goal for Cincy’s target man, who earned the opportunity to audition for the World Cup roster spot in September.

D By Andre Yedlin (Miami): Yedlin was a workaholic in his first MLS season since 2014, starting all but one of Miami’s 25 games.

F Jozy Altidore (Puebla): It’s just one goal, and it will take many more for Altidore to return to the national team for the first time in nearly three years. Unlikely? Yes. But not impossible.

D George Bello (Arminia Beilifeld): Bello was booked after being substituted in Arminia’s 2-0 loss to Hamburg in the German second division.

M Gianluca Busio (Venice): Busio started but was substituted 10 minutes before Venezia scored their only goal in Sunday’s 2-1 Serie B loss to Genoa.

*F Daryl Digue (West Brom): Dike is virtually out of the game now with a hamstring injury that could keep the big forward out for two months.

F Matthew Hoppe (Middlesbrough): The 21-year-old must start in England to hope to go to Qatar.

M Djordje Mihailovic (Montreal): The playmaker has scored 90 straight MLS games for the first time since suffering an ankle injury that forced him out of the USMNT’s June camp.

D Erik Palmer-Brown (Troyes): The well-traveled centre-back is having a rough start to the season; Troyes have conceded six goals in their first two Ligue 1 matches.

F Hadji Wright (Antalyaspor): Wright scored his first goal of the Turkish season on Sunday, a second-half winner against Umraniyespor.

*Mr Richy Ledezma (PSV Eindhoven): However slim a chance Ledezma had of sneaking into the line-up, he suffered a serious blow when he injured his ankle on Saturday in his first competitive start for PSV.

D Shaquel Moore (Nashville): He went 90 against the Loons, the first time Moore has played a full game since joining MLS earlier this summer.

F Ricardo Pepi (Augsburg): Pepi came on for the dying seconds of Augsburg’s 2-1 win over Bayer Leverkusen – a result that should keep him on the bench next weekend.

M/F Josh Sargent (City of Norwich): In a rare departure from his natural centre-forward position, Sargent scored his first Premier League goal on Tuesday against Huddersfield.

Dr Joe Scally (Borussia Monchengladbach): Deployed as a right winger, Scally struggled with his serve from the flank in Gladbach’s 2-2 draw with Schalke.

Can he find his way into Berhalter’s plans? Helping Rangers reach the Champions League proper would boost their chances.

M Eric Williamson (Portland Woods): Any injury to Acosta, Adams, McKennie or Musah could open the door for Williamson, who can play a box-to-box or holdout role.

F Gyasi Zardes (Colorado Rapids): The USMNT’s gaping hole at centre-forward is keeping the USMNT veteran – who has scored five goals in his last six MLS games – on the radar for now.

One of North America’s leading football journalists, Doug McIntyre has covered the United States men’s and women’s national teams at several FIFA World Cups. Prior to joining FOX Sports in 2021, he was a staff writer at ESPN and Yahoo Sports. Follow him on Twitter @ByDougMcIntyre.

Get more from the USA Follow your favorites for game insights, news and more.