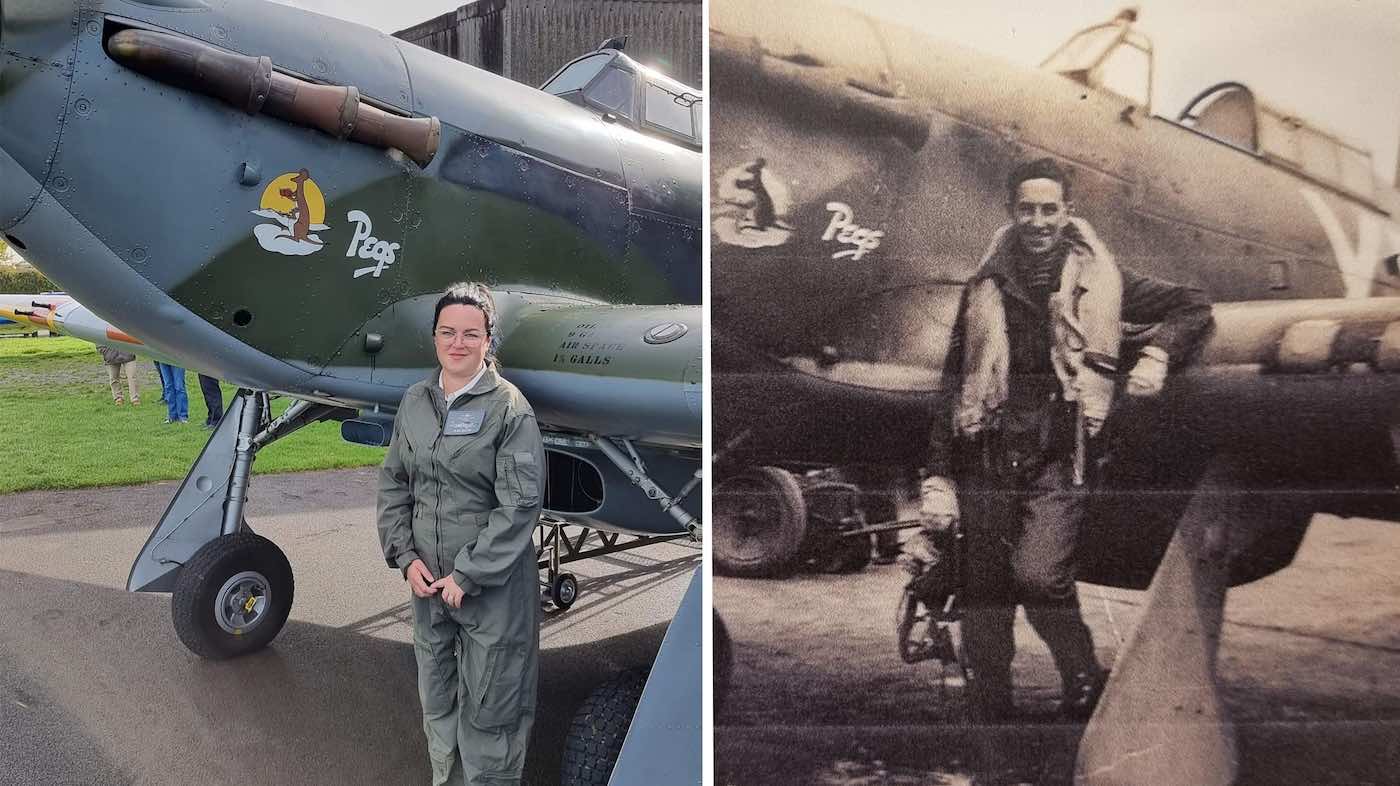 An Australian woman has had the ride of her life after discovering a replica of her grandfather’s WWII plane and traveling 9,000 miles to recreate her favorite photo.

Courtney Dohnt never got to meet her Australian grandfather who fought alongside British and Allied forces, flying in a Hawker Hurricane.

The plane – called Pegs after his beloved wife Peggy – was shot down during a raid on German-occupied territory in 1942. His grandfather, Charles Bryce Watson, survived, but died twenty years before Courtney was born.

His stories lived on in Courtney’s family, and a photo of him next to the plane took pride of place in their home Down Under in Geelong, Victoria.

They heard of a Hawker Hurricane being restored in Berkshire, England, and got in touch to find out more about the aircraft.

They were amazed when they discovered that the restorers had coincidentally used the “Pegs” label on the painting, along with the kangaroo logo from its original model.

“I was so excited when I heard about the plane. I jumped at the chance to see it,” the 38-year-old said. “That picture was on our wall at home when I grew up, so this experience hit me like a ton of bricks.”

RELATED: The couple’s love still blossoms 40 years later as they recreate the first photo posing next to a 12ft sunflower (WATCH)

Courtney flew to the UK this month to view the plane, which is used for UK memorial flights, and cleverly recreated her favorite photo.

“It was so overwhelming to be able to see this plane, with ‘Pegs’ painted on the side for my grandma, like in Charles’ picture.”

The restoration company, Hurricane Heritage, told him the plane was an identical model to his grandfather’s, which featured an image of a boxer kangaroo to represent his Australian origin. He was part of RAF squadron no. 174 and flew from Manston in North East Kent.

“They were thrilled to hear from me,” Courtney told the SWNS news agency.

She only expected to be able to see the plane and take her pictures, but when she arrived, to her surprise, they offered to take her to Pegs 2.0.

“I jumped at the chance,” Courtney said.

“A pilot flew me, and a Spitfire pilot even flew with us in formation. He flew past us like cat and mouse.

“But it was the most amazing experience as soon as I arrived and saw ‘Pegs’ on the side.

“I was able to not only see but fly in my grandfather’s RAF plane – how many people are lucky enough to do that?!”

AFTER: D-Day hero’s lost postcard finally delivered to his family 77 years after it was sent

Watch vintage planes take off and fly in tandem…

SHARE the incredible story with WWII historians on social media…

2022-10-29
Previous Post: Are you looking for a new aircraft? AI Evaluator lets you search for free — General Aviation News
Next Post: Dr. Phil