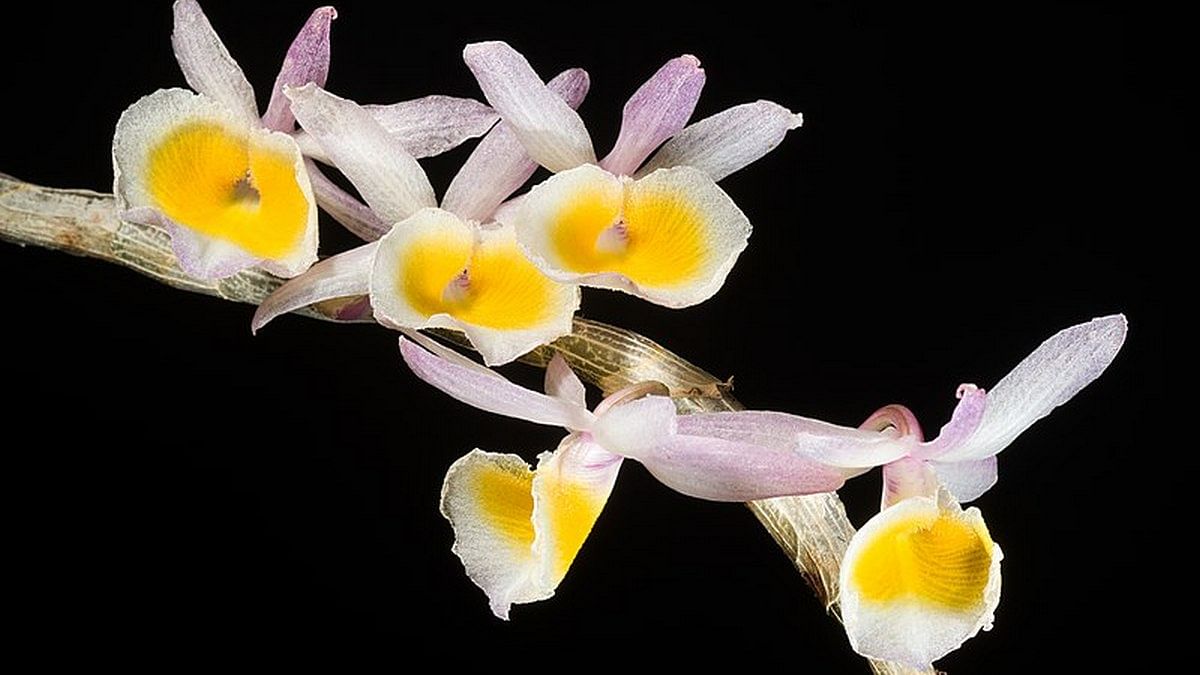 (West Kameng, Arunachal Pradesh is home to Asia’s largest orchidarium and the Sessa Orchid Sanctuary. So naturally the district chose orchids as its signature ODOP—one district one product. Unfortunately, the export of orchids wild is restricted by CITES or the Convention on International Trade in Endangered Species As global supply chains integrate and fresh flowers from Kenya and Ethiopia end up at florists in Paris and London, crippling Indian air freight charges, lack of a cohesive export policy on perishables and floriculture and lack of investment in supply chain infrastructure have caused India to miss the flower bus .)

The week leading up to Valentine’s Day 2022 saw a frenetic stampede as twenty-four charter flights headed for Europe from Nairobi airport. Another half dozen flew to Dubai. These flights were not packed with people, but with 5,000 tons of freshly cut flowers for sale in European markets. After a two-year shutdown induced by Covid-19, the global flower market has come back strong. A flower-buying frenzy has created a 25% increase in demand and a record price at the world’s largest flower auction, Bloemenveiling Aalsmeer in the Netherlands. During the same week, the number of dedicated cargo flights carrying flowers from India was zero.

For almost two decades, global flower markets have been integrated with the demand for flowers – fresh, dried, cut (with stem), bulk (without) and ornamental plants in Europe served almost entirely by Kenya and Ethiopia, while that of the United States is met by Colombia and Ecuador. It is significantly cheaper (especially during the winter) to harvest a rosebud in Kenya, fly it from a cold store overnight in Paris or Oslo, and deliver it farm-fresh to a florist on next morning ; than growing it locally in a greenhouse.

India exported a modest 15,000 metric tons of flowers, mostly roses worth $78 million in 2020-21. During the same period, cut flower exports from Kenya alone were worth $596 million (nearly eight times that of India) and exports from Ethiopia were $191 million. While the main buyers and auction houses are in the Netherlands, well-oiled integrated supply chains ensure that farm-fresh flowers travel overnight from Africa to florists across the Europe. Africa has a monopoly on European rose markets while Thailand and Malaysia control niche markets, tropical flowers like orchids and anthuriums which are in high demand in Japan and the United Arab Emirates. One has to wonder, how did India miss the bus on this?

India, especially the North East, is home to over 1,300 different species of orchids, more than half of which are found in Arunachal Pradesh. Less than 60 km from Tezpur, Assam by road is the village of Tippi, West Kameng, home to the largest orchidarium in Asia and the Tippi Orchid Research Center. In the early 1970s, the Governor of the North-East Frontier Agency (now Arunachal Pradesh) set up an orchid station at Tippi with the specific objective of “collecting, using and marketing orchids”. India has created a world-class infrastructure for orchid cultivation, research and biodiversity, establishing institutes like the National Orchid Research Center in Pakyong, Sikkim and the Research Center and Orchidarium in Tippi. He even established one of the world’s first orchid sanctuaries, Sessa Orchid Sanctuary, which houses more than 200 orchids protected in West Kameng in 1984.

Yet despite the abundance of orchids, the presence of advanced and dedicated research centers to promote orchid cultivation, the existence of Asia’s largest orchidarium, and a stated goal of supporting the “commercialization” of orchids, the India imported orchids worth Rs 23 crore in 2019 and exported a negligible amount of less than Rs five lakh of orchids during the same period. India’s commercial production of orchids was even insufficient to meet its own domestic demand.

In a confusing move, six districts in northeast India – West Kameng and Siang in Arunachal Pradesh, Champhai and Lawngtlai in Mizoram, Zunheboto and Noklak in Nagaland – have selected orchids as their flagship product under of the ODOP initiative. In all of these districts, the known biodiversity hotspots have very limited and organized orchid cultivation, with most orchids growing wild. This is where the first challenge lies.

Although the reasons for the selection of orchids under the ODOP may have been their abundance in the wild, CITES restricts the collection or export of wild orchids to prevent illegal trafficking of protected species. This implies that, in practice, to find a real market for these products, India must either revise the ban on wild orchids or promote organized cultivation. This is where the second challenge lies. West Kameng, with a population of less than 90,000 people, has almost no capital or infrastructure available to promote the culture or market it globally.

The global floriculture industry is valued at nearly $9 billion, of which India’s share is negligible. The lack of growth in the floriculture market in India, especially for tropical flowers like the orchid, stems from a number of issues – from logistics and infrastructure issues like the lack of a cold chain developed; paternalistic policies focused on preventing the exploitation of fragile ecosystems; and the remoteness of the northeast. But there is no greater reason than the systemic neglect of the sector, and a lack of imagination and coordination between different agencies.

The history of floriculture in India is one of the missed opportunities. Compare the history of India to that of Ethiopia with a non-existent cold chain and a barely functional railway system; almost no research institutions or floriculture expertise and detached, remote and remote from global markets like the United States, the Netherlands or Japan, Ethiopia had all the challenges that India faced and none of the advantages. However, in less than fifteen years, it has become one of the leading exporters of cut flowers to European markets, which today contribute more than 8% of its export earnings.

What has Ethiopia, or Kenya for that matter, done to achieve this scale? They consciously promoted floriculture in major international markets, offered tax exemptions, organized growers, and worked to create infrastructure for its flower growers. Ethiopia opened a dedicated “perishable cargo terminal” in Addis Ababa to facilitate air cargo exports, expanded cold storage space and worked with European markets to meet their stringent phytosanitary requirements. Kenya has also set up a dedicated “flower terminal” at Jomo Kenyatta International Airport.

Most, if not all, of India’s flower exports and crops are in the southern states with a fixation for roses. It overlooks tropical flower varieties such as orchids and anthuriums, which have a rapidly growing niche market. Unlike roses and carnations (which require a cold chain between 0 and 2 degrees), tropical flowers like orchids and anthuriums only need a constant temperature of 10 to 13 degrees and have a long shelf life. longer, making their transportation more viable and cost-effective. .

Today, West Kameng and the Tippi Orchidarium are connected by road and rail to major airports in the region. The proposed East-West Industrial Corridor Highway project will only improve their connectivity. If India can export perishable cut roses from Bengaluru to markets as far afield as Japan and Australia, exports from the North East have an equal chance. The world’s largest importer of exotic orchids is in Japan, where the Ota flower auction is held, and most of its current needs are met by Thailand and Malaysia, which are further afield than Guwahati. Although the Ministry of Civil Aviation has shown some interest in providing funding to bridge the viability gap under its revised RCS-UDAN cargo guidelines, even if West Kameng Orchids make it to the Guwahati airport, they have to deal with crippling air freight rates and a lack of phytosanitary inspection. airport infrastructure.

Tippi’s orchid research center, West Kameng, has produced several hybrid orchids such as Tippi Jubilee Star, Blue Boy and Green Beauty, which have been recognized by the Royal Horticultural Society of London. However, little marketing work has been done beyond this. These hybrid orchids remain on display in a centrally installed demonstration farm, with almost no emphasis on marketing or promotion to world markets. A stem of Malaysia’s Gold of Kinabalu orchid, a perishable flower from the remote forests of northern Borneo, sells for $6,000 at auction houses worldwide. This is the result of years of promotion in international forums, while Indian orchids are yet to appear in auction catalogs.

If Ethiopia’s remote provinces can integrate their markets into global supply chains for perishable goods, West Kameng may soon be able to too. But this requires a broader vision and a paradigm shift in central legal and logistics policy to export, sell and promote. Home to the largest orchidarium in Asia, the greatest orchid biodiversity in the world, a high level of scientific expertise and a truly one-of-a-kind product, these cross-industry bottlenecks must be addressed quickly to let Indian orchids flourish globally.

District Bar Code is a series on the Indian Government’s One District One Product program. Read all articles here.

Sanyukta Samaddar is an IAS officer who is currently a Nodal Officer (SDG), at NITI Aayog. She tweets @SanyuktaSam1. Adhiraj Parthasarathy is Director of Development Monitoring and Evaluation Office, NITI Aayog, where he works on evaluation of government programs. Views are personal.

2022-04-10
Previous Post: Airplane navigation: how to stay healthy on a long-haul flight
Next Post: Honeywell seeks more suppliers as it works to support Boeing and Airbus aircraft targets