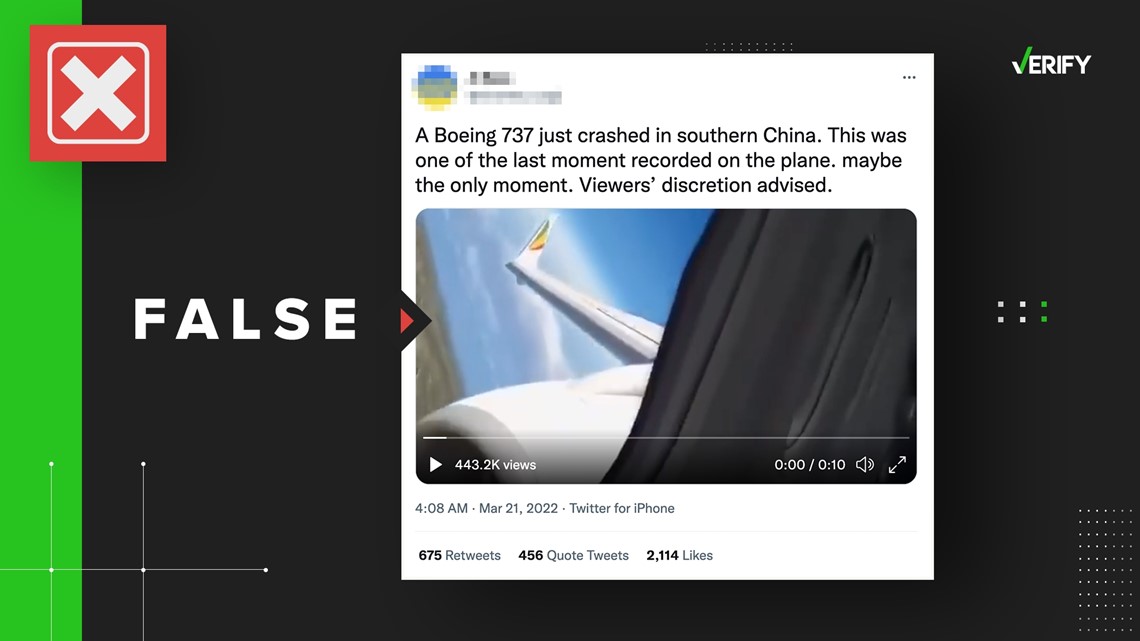 Viral video inside plane not from Boeing crash in east China

A video purporting to show China Eastern’s Boeing 737-800 crash on March 21 is not real. This is a flight simulation depicting the Ethiopian Airlines crash in 2019.

A China Eastern Boeing 737-800 with 132 people on board crashed in southern China on March 21. The Civil Aviation Administration of China said in a statement that the accident happened near the city of Wuzhou.

China Eastern Flight No. 5735 was flying at approximately 30,000 feet when suddenly, just after 2:20 p.m. local time, the aircraft entered a deep nose-dive and crashed. Chicago-based Boeing Co. said it was aware of initial reports of the crash and was “working to gather more information”.

On social media, a video with over 400,000 views (archived links here, here and here) claims to show the last moments recorded from inside the plane before it crashed. In the video, people are heard screaming before the plane crashes.

A Boeing 737 has just crashed in southern China. It was one of the last moments recorded on the plane. maybe the only time. Viewer discretion advised.#Boeing #ChinaPlaneCrash #SAD pic.twitter.com/12KFloIefT

Did this viral video from inside a plane of the China Eastern crash?

No, this video is not from the China Eastern crash. The video shared on Twitter is a simulation of the Ethiopian Airlines B737 crash in 2019.

Using InVID, a video forensics tool, VERIFY took a single frame from the alleged crash video to compare it to previous videos posted online. Then we used reverse image search tool RevEye to trace that image back to a video posted on YouTube in 2019 of a simulated Ethiopian Airlines B737 fatal crash.

In 2019, a Boeing 737 Max 8 operated by Ethiopian Airlines crashed shortly after takeoff from the capital Addis Ababa, killing all 157 people on board. The clip which went viral on March 21 was taken from the simulation of this accident and can be seen from around 9.25am.


The beginning of the YouTube video says: “This simulation crash is made with the x-plane 11 flight simulator [XP11]. That’s not exactly what happened, it’s just a simulated flight accident for Ethiopian Airlines flight ET302. This story is based on a real event [sic].”

The simulation was posted by an account that publishes plane crash simulations. VERIFY could not confirm the original creator of the simulation.

The Ethiopian Airlines logo can be seen on the plane’s wing in the viral video and matches the logo seen in the YouTube video.

From 1⃣9⃣5⃣7⃣ to 2⃣0⃣2⃣2⃣, the pilot team of #CEAir has grown from just 28 members to a large group of skilled and professional pilots. Traveling through the skies, they have safely transported countless passengers to their destinations. #CEAir65 #From time to time pic.twitter.com/AYYpQZRgXZ

On March 21, rescue operations were underway in southern China and there was still no news of survivors. Boeing said in a statement that the company is in contact with the National Transportation Safety Board of the United States and is ready to participate in the investigation led by the Civil Aviation Administration of China.

The Associated Press contributed to this report.

The VERIFY team strives to separate fact from fiction so you can understand what’s right and wrong. Please consider subscribing to our daily newsletter, SMS alerts and our YouTube channel. You can also follow us on Snapchat, Twitter, Instagram, Facebook and TikTok. Learn more “