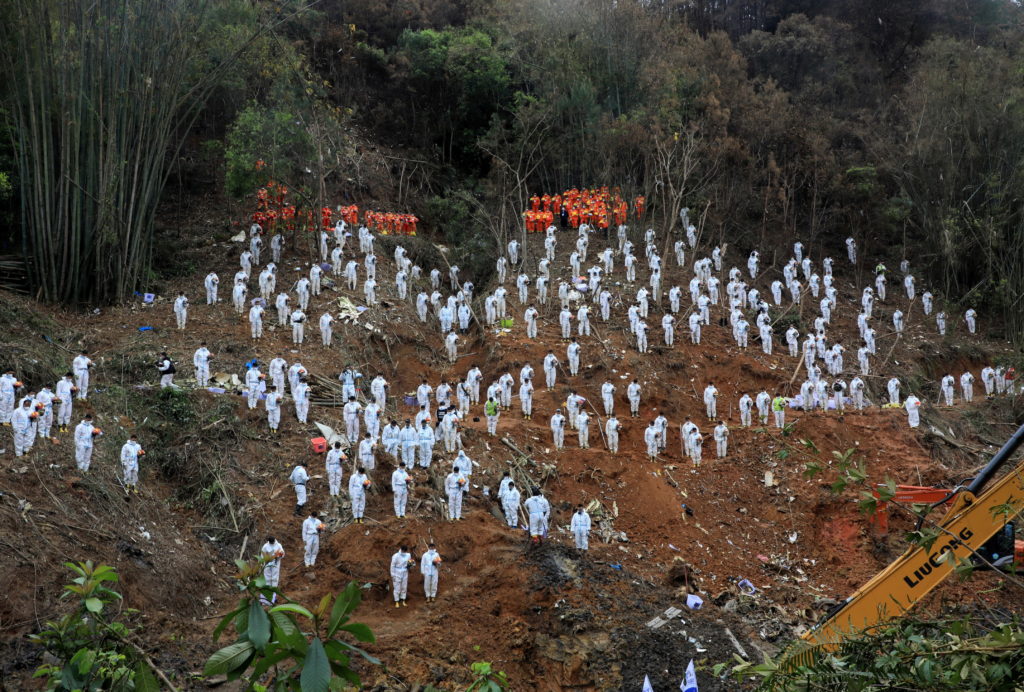 US investigators travel to China to help with plane crash investigation

BEIJING (AP) — U.S. crash investigators arrived in China Saturday to help authorities search for clues to the cause of the crash of a Boeing jetliner last month with 132 people on board.

The National Transportation Safety Board’s seven-member team will assist with the Civil Aviation Administration of China’s investigation into the March 21 crash of a China Eastern Airlines Boeing 737-800 because the plane was made in the USA.

As part of the assistance, the plane’s cockpit voice recorder is being downloaded and analyzed at a US lab in Washington, federal officials said Friday.

Investigators hope the recording will explain why the plane plunged about 8,800 meters (29,000 feet) above a mountainous region in southeast China.

Chinese officials said air traffic controllers were unable to get a response from the pilots during the plane’s descent.

The cockpit voice recorder would pick up voices and other sounds from microphones worn by the pilots and another placed above their heads.

Researchers also recovered the plane’s flight data recorder, which continuously records speed, altitude, heading and other information as well as the performance of key aircraft systems, but this recorder was not assessed in Washington on Friday.

The NTSB said its investigators will limit contact with people outside the investigation so they can begin their work immediately without going through a quarantine period.

The plane that crashed was not a 737 Max, a newer model that has been temporarily grounded worldwide following two fatal crashes in Indonesia and Ethiopia.

The impact from the crash in China created a crater 20 meters (65ft) deep, ignited a fire in the surrounding forest and shattered the plane into small parts scattered over a large area, some of it buried underground. More than 49,000 pieces of debris were recovered, along with human remains and personal items.

A Chinese aviation safety official said a preliminary investigation report would be completed within 30 days of the crash.

Flight MU5735 with 123 passengers and nine crew members was heading from the southwestern city of Kunming, the capital of Yunnan province, to Guangzhou, a major city and export manufacturing hub near Hong Kong. in southeast China.

The 737-800 has an excellent safety record and the Chinese airline industry has had relatively few incidents in recent years.

Prior to last month’s accident, the last fatal crash of a Chinese airliner occurred in August 2010, when an Embraer ERJ 190-100 operated by Henan Airlines struck the ground short of the runway in the northeast city of Yichun and caught fire, killing 44 people. Investigators blamed pilot error.