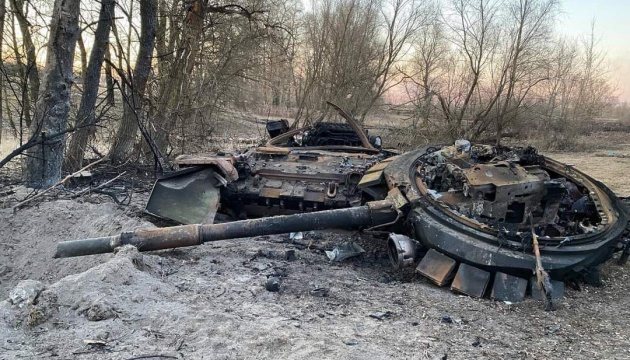 The Ukrainian army destroys an enemy plane, five tanks, six IFVs and an Orlan drone in the direction of Donetsk

Russian troops suffered heavy casualties on March 19 while attempting to break through the defense of the Ukrainian army in the area of ​​responsibility of Operational and Tactical Group East.

According to Ukrinform, the Eastern Operational and Tactical Group said so in a statement on Facebook.

Five tanks, six infantry fighting vehicles, four vehicles and one Orlan drone were destroyed in the direction of Donetsk over the past day, the statement said.

“The defenders of Mariupol continue to show their incredible resilience and heroism. Today they destroyed one tank and two armored personnel carriers of the enemy. Moreover, with the help of available air defense systems , they destroyed an aircraft (the type of aircraft is being clarified), ” the statement added.

The work of the Ukrainian artillery was no less productive, since a supply convoy made up of two tank trucks and four vehicles was destroyed. The gunners also shelled the invading Russians’ personnel and equipment. As a result, five infantry fighting vehicles and two armored personnel carriers were destroyed.

“As far as manpower is concerned, at least 150 Russian occupiers are already listening to Kobzon,” Operational and Tactical Group East said.

The General Staff of the Armed Forces of Ukraine said on March 19 that the Ukrainian army destroyed two Ka-52 helicopters, one in the direction of Zaporizhia and the other in the kyiv region.