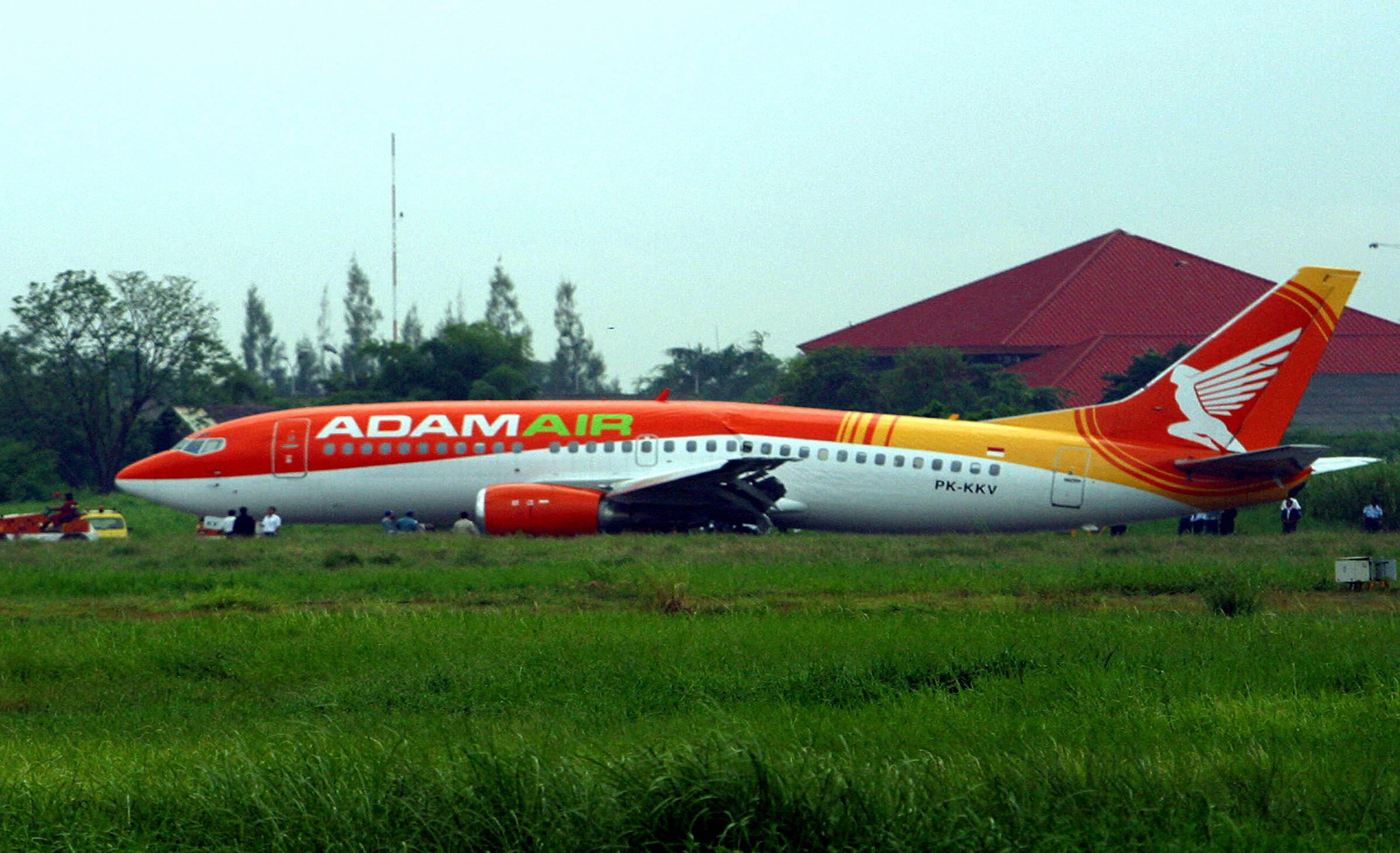 The plane with the twisted fuselage: Adam Air Flight 172

Today marks 15 years since a curious incident involving a Boeing 737 flown by Indonesian carrier Adam Air. After making a hard landing just outside Surabaya, a structural failure caused a crack to emerge in the plane’s fuselage, which bent as a result. Let’s go back to the incident and its consequences.

The flight and aircraft involved

Adam Air Flight 172 was a scheduled service that departed from Soekarno-Hatta International Airport (CGK), which serves the Indonesian capital of Jakarta. This facility served as the main hub for Adam Air during its six-year existence, which lasted from 2002 to 2008. It ranked as the 25th busiest airport in the world in 2019.

Flight 172’s destination was Juanda International Airport (SUB), just outside Surabaya, Indonesia’s second largest city. Given that this corridor connects the two largest urban centers in the country, it is not surprising to see that several airlines still serve it today. These include key players such as Citilink, Garuda Indonesia and Lion Air.

The aircraft that operated Adam Air Flight 172 15 years ago today, February 21, 2007, was a Boeing 737-300 registered PK-KKV. According to data from ATDB.aeroit would then be almost 13 years old, having entered service with Air Columbus in May 1994. PK-KKV joined Adam Air in December 2006.

According to Aviation Safety Network, there were 155 people on board Adam Air Flight 172 on February 21, 2007. This figure included 148 passengers and seven crew members. While the flight went mostly as planned, its landing in Surabaya took a rather dramatic turn, when the plane’s right wheel touched down four meters from the runway. The pilots then brought the jet back to the runway.

However, the nature of the touchdown, less for its misalignment than for its force, had caused significant structural damage to the aircraft. Recording a reported 5G, the hard landing caused the fuselage to crack and buckle due to the strong vertical forces exerted on it upon touchdown. This then caused the body of the aircraft to bend down behind row 16.

As seen in the photo at the top of the article, the folded fuselage of the jet offered a rather curious sight. Despite visible damage to the aircraft, only two of its occupants were slightly injured and all 155 occupants were able to evacuate via the available exit slides. However, the investigation revealed some alarming truths, underscoring wider concerns about Adam Air’s safety.

Adam Air ceased operations just over a year after the incident, in June 2008. Photo: Getty Images

Stay informed: Sign up for our daily and weekly summaries of aviation news.

Adam Air’s other Boeing 737s were grounded after the incident, as it followed a fatal accident involving another of its narrow-body Boeings a month earlier. Investigators found professional misconduct on the part of the pilots, who failed to complete an approach briefing and read a pre-landing checklist. They also did not follow the procedures announced by Boeing, nor respond to a GPWS warning.

With the latter, a response to the warning of impending ground proximity may have prevented the aircraft from descending so hard. However, since the crew did not take such preventive measures, the aircraft suffered significant damage due to the abnormal touchdown. This eventually led to him being written off at Juanda International, despite his relatively young age of just under 13.

The paint scheme, which the jet received in Airbus’ hometown, is a throwback to the airline’s early years.

Journalist – With a degree in German, Jake is passionate about aviation history and enjoys learning about new carriers and planes even if it requires an unorthodox itinerary. A passionate amateur photographer, he also recently passed the milestone of flying his 100th sector as a passenger. Based in Norwich, UK.