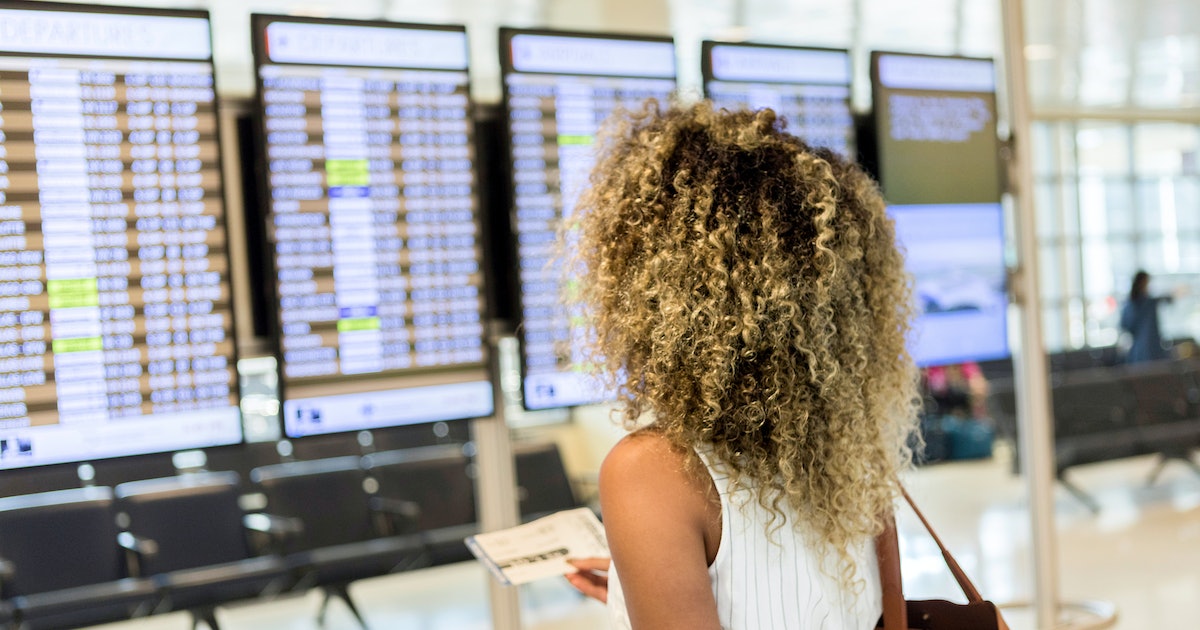 The day I just got on a plane to go somewhere

I was supposed to be on a flight to Nairobi for a press trip. But I arrived at Cleveland airport three hours late after a sudden snowstorm in the Midwest derailed my connection, and I found myself at JFK, frantically trying to rearrange my plans – until which I finally stop running and throw in the towel.

I called the father of my children to tell them what had happened. He told me to get home on the next flight to Cleveland. As people around me came and went, I scanned the list of departing flights with my gym bag, camera and laptop at my feet. I could go back to the snow, to the duplex that needed updating, and to the two toddlers I had kept alone for 10 days straight.

I could do what I always wanted – something you used to see in 90s movies, before the internet and online booking. Here I was at the airport with my bags packed, time off approved, babysitter arranged, standing in front of a departure board. I could just choose from the list and go somewhere else. Anywhere else.

I looked back at the flights with renewed hope. Japan caught my eye first, but it was still closed to Americans due to COVID-19. Next on the list: San Juan, Puerto Rico.

I had visited a decade earlier, and I was lucky and caught the San Sebastian Street Festival. Was it the same kind of fate? COVID-19 restrictions for Puerto Rico had just been relaxed. My bags were already made for the warmer weather. I checked the cost of a flight to San Juan and the cheapest was around $200. The cost to return to Cleveland was $500.

I moved my feet as people checked their bags at the nearby counter. Was I irresponsible? My travel insurance would surely pay for the return flight or I could try to catch the next flight to Nairobi. But the press tour was a safari, so I had to find my way out of town to catch up even though I landed in Nairobi the next day.

10 years ago, I had missed going to see Puerto Rico’s Bioluminescent Bay because I was hungover at 23 and staying in a hostel. After drinking at the San Sebastian Street Festival with my sister, I didn’t bother waking up early enough the next morning, even though I really wanted to see the glowing plankton.

There are only five bioluminescent bays in the world and three of them are in Puerto Rico. The best time to see the light effect happens to be during the new moon, which was only a few days away.

I got on the plane.

Before, I wanted to travel and never settle down. At my peak, I could walk 10 miles a day in the Rockies. At that time, I dreamed of teaching English across Asia and Africa and writing novels in a hammock. While I had always wanted children, I had planned to travel with them to distant places. Then reality set in: difficult pregnancies, sick parents, and a pandemic put all of those things on hold indefinitely. Even solo travel has stopped.

I jumped at the chance to reconnect with my pre-baby adventure travels, booking hostels and lacing up my hiking boots. Almost immediately, I had to make some troubling concessions. I was no longer young or fit enough to blend in with college kids and their tireless lives. Clearly a matron and no longer a maid, I recognized this frustrating new fact about myself – and booked private rooms. Yet I avoided the other thoughts that hung over the edge like the skin over my C-section scar.

But, inevitably, those whispers resurfaced in the stillness of the night when I returned to my (now) private room and undressed in front of the mirror. I didn’t like how pregnancy had changed me. I sank from exhaustion and years of serving pieces of myself; of my body and my dreams. While building everyone, I had become soft and docile. Yes, I had been ready for part of motherhood – the stretch marks, the saggy breasts, the sleep deprivation. Other parts were lukewarm: the weight gain that didn’t go down with the diet, the arguments that increased with my spouse, and the difficulty in finding adequate child care.

On my last night in Puerto Rico, the whole place was plunged into darkness after a circuit breaker failure caused the power to black out across the island. I got up from my bed when I heard the disgruntled groans of the La Factoria revelers across the street. Grabbing my Canon and a flashlight, I stepped out onto the second story balcony of my Old San Juan AirBnb and opened the shutter, taking long exposure photos.

Eventually, a generator for the bar kicked in and a yellow light melted from an open window, illuminating a young woman on a date. As if in a picture frame, she was perched on her chair and glowed against the darkness around her. I’ll never be her again, I thought.

I took a few more photos, then leaned on the stone railing. The night was wet and sticky on my face. I wiped away the sweat that was accumulating under my breasts and looked back at the young woman. Have I ever been like her?

Even before the kids, I was never the person to stay out late or sit in a window seat with my back to the door. So as long as it’s true I can’t become who I was, I can still become who I want to be. Now if only I can understand that.

In July, I will start again at my beginnings. I’m going to Italy to find my great-grandmother’s birth certificate. Already, I’ve learned that women in my maternal line have a penchant for leaving; leaving husbands and parents, fatherlands and families.

Maybe we’re just the type looking for something better or another place to live, even if we don’t know exactly what we’re looking for.

Aja Hannah is a writer, traveler and mother. She is the author of two books and hundreds of articles on diversity, equity and sustainable travel. As an active member of the Society of Travel Writers, she conducts press trips that prioritize trips with an ecotourism or human-centric angle. She believes in the Oxford comma, cheap flights and a daily dose of chocolate.