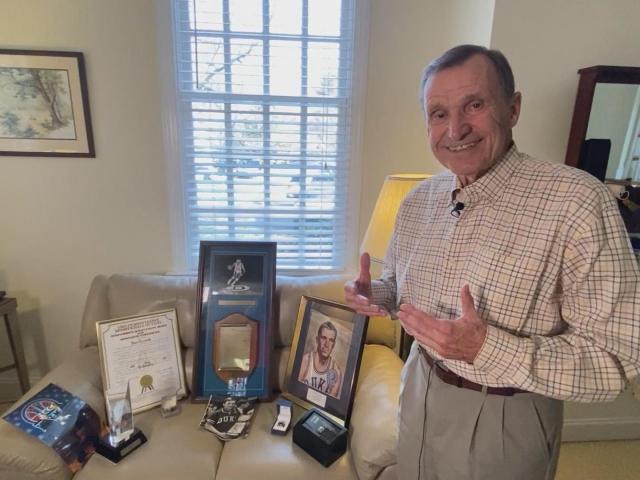 Steve Vacendak is a humble man who has accomplished great things.

“Here we have my Hall of Fame ring from Duke University,” Vacendak said, pointing to one of his many awards.

“I played hard all the time,” Vacendak said of his playing days. “I was a really good defensive player.

“I felt so proud because my teammates were wonderful,” Vacendak said looking at a photo of himself during his Duke basketball warm-up. “It was as fine a bunch of men as I’ve ever seen in my life.”

Vacendak was then drafted by the San Francisco Warriors. He won a championship with the ABA’s Pittsburgh Pipers. In 1980 he returned to Durham. This time as Associate Sporting Director. Tom Butters was the athletic director and put it to work.

“When I was hired, Tom said your first job was to go out and get us a basketball coach,” Vacendak said. “I didn’t get paid until June, I could have been fired before I was hired.”

Duke was fresh off a trip to the Elite Eight. Bill Foster left the program to take up the position of head coach in South Carolina.

“South Carolina wasn’t necessarily a basketball powerhouse in those days,” Vacendak said. “People were wondering what was going on and why it would happen. Tom was under a lot of pressure to bring in someone who would be exceptional.”

One of the first candidates to come to mind for Vacendak was a young coach named Mike Krzyzewski. Several years earlier, Vacendak had had the opportunity to see how Krzyzewski ran the Army program at the Army vs. Navy game in Annapolis, MD. Vacendak High School coach Jack Gallagher was friends with Bobby Knight and invited him to Krzyzewski’s coaches meeting.

“It was a great idea,” Vacendak said. “Mike knocked him out of the stadium as far as I’m concerned in his preparation and preparation to play this game.”

Vacendak has compiled a list of candidates and information to help Butters hire. Vacendak thought Krzyzewski had all the qualities to succeed at Duke despite going 73-59 at Army.

“What stood out was his character and all of his personal attributes and his value system,” Vacendak said. “That’s probably the turning point in Mike’s hiring at Duke.”

After Krzyzewski’s third interview, Vacendak took him to Raleigh-Durham Airport. Krzyzewski was at the door when Vacendak received a page from Butters with a simple message: Don’t put him on that plane.

“Take him out to dinner,” Vacendak recalled Butters telling him. “I said, ‘Tom, what are you doing, it’s been a struggle.’ He said, “Well, I’ll offer him the job, but don’t tell him.”

Vacendak then took Krzyzewski to dinner at the Angus Barn with an elephant in the room.

“Mike asks what this is about,” Vacendak said. “I’m sitting there knowing he’s going to be offered the job and that I’m not sharing it with him. Which was a natural inclination. It was offered to him after that dinner after I dropped him off.”

Forty-two years later, Krzyzewski’s term is almost over, but his reign is not over.

“I like to sum up by saying we hired the right person at the right time at a great university and it was a wonderful marriage,” Vacendak said. “Mike’s retirement is not a divorce as he will continue in another role I am sure will help the University.”