Snake on plane causes panic on US flight, Samuel L Jackson nowhere to be found

A snake has sown panic in business class section of a recent US flight.

It turned out to be a harmless garter snake that appeared to have snuck aboard while the plane was on the tarmac earlier in Tampa, Florida.

The Port Authority of New York and New Jersey confirmed that they had removed the snake and released it into the wild.

Unlike the cult Film by Samuel L. Jackson Snakes on a plane, incidents of crawling reptiles on flights are rare.

Earlier this year, a pilot in Malaysia was forced to take a detour after a snake was spotted crawling inside the lighting panel above passengers on an AirAsia flight.

In 2017, Dubai-based airline Emirates had to cancel a flight from Muscat, Oman, to Dubai after a snake was spotted slithering through the cargo hold.

A few months earlier, a snake appeared from an overhead overhead bin on an Aeromexico flight over Mexico.

Other unwanted creature sightings include a business class bat on an Air India last year that forced the pilot to turn back.

For a daily dose of 9Honey, Subscribe to our newsletter here

In 2019, a Spirit flight in the United States received an unexpected visit from a flying mammal. Videos posted to social media showed passengers screaming and laughing as the bat flew up and down the cabin.

Other wild animals without a boarding pass over the years include rats and wētā (large flightless crickets).

This article was originally published on AU stuff and has been republished here with full permission.﻿ 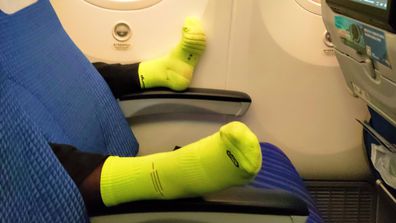