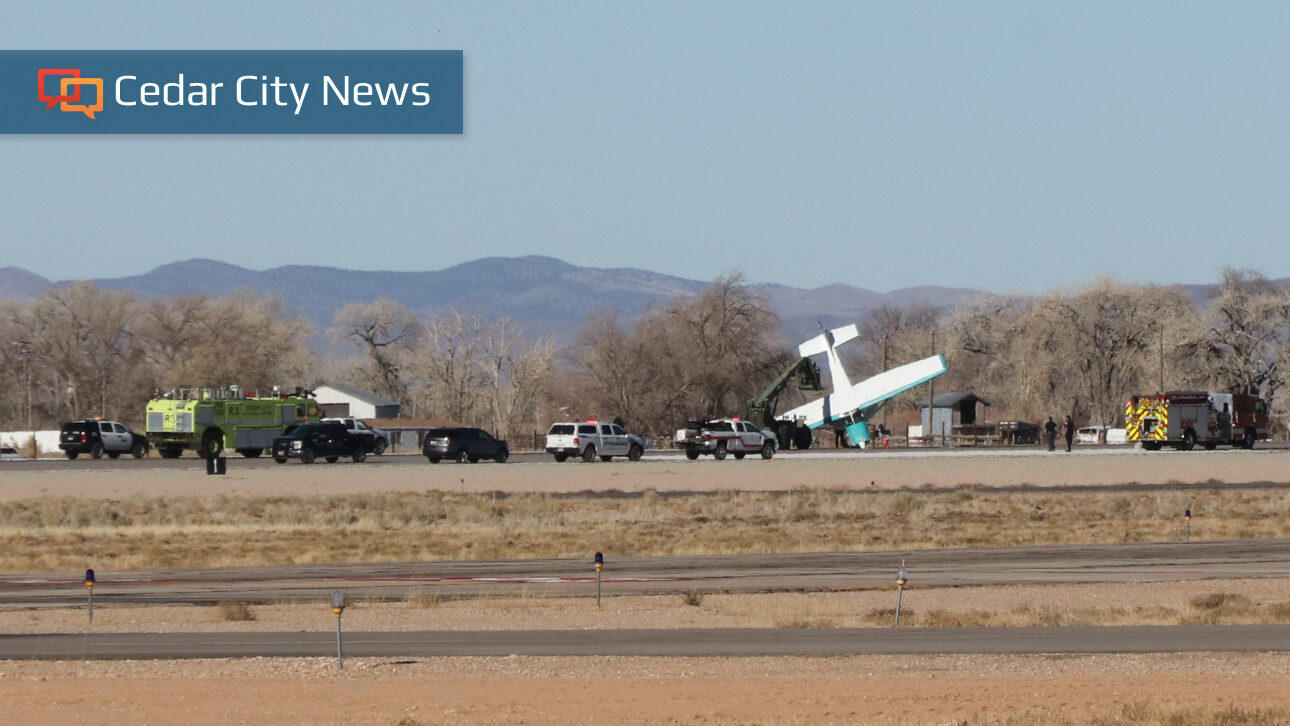 “Airport operations were informed that there was a plane crash on the runway,” Holt said, adding that he and airport operations specialist Tyler Galetka had both responded to the scene. In doing so, they called Cedar Communications 911 dispatchers.

“Our first responders were able to come out and help us with this incident,” added Holt.

The plane, a Cessna 185 with two people on board, was landing on the northern part of the runway when it first crashed nose into the ground, Holt said.

“It’s hard to say at this point what really caused this,” he said. “He hadn’t reported any incidents before landing. It had just landed normally and ended up on its nose.

The two men on the plane were able to exit the plane on their own and get away with no injuries, Holt said.

The airport’s two main runways were closed for more than an hour while crews worked to clear the scene, Holt said.

“We opened our secondary or crosswind runway so the flight school and other people waiting at the refueling company could take off while we continued to practice on the main runway to retrieve the aircraft.” , did he declare.

“They had to put a strap around the rear end in order to lower it onto its wheels,” he said. “There was a fuel leak that we had to work with and contain. “

Despite the temporary closure of the two main runways, an inbound SkyWest flight was only delayed for around 10 to 15 minutes, and the subsequent departure flight was able to depart as planned, he said.

“Our ground crew here with SkyWest worked really hard to turn their plane around and get it out on time,” added Holt.

Holt said the National Transportation Safety Board will lead the investigation.

“The NTSB will contact the pilot and decide if a further investigation needs to take place, then the owner can decide whether he wants to have it fixed here or take his plane somewhere else to have it fixed,” he said.

“We’re really thankful to have good first responders here who are prepared for this sort of thing,” said Holt. “Every year we have a table discussion about the protocols for responding to an emergency accident here at the airport, and every three years we do a live exercise where we simulate these kinds of incidents.”

This report is based on preliminary information provided by first responders or airport officials and may not contain all of the findings.

Jeff Richards, originally from Salt Lake City with family roots in Panguitch, lived in Moab for 20 years before joining St. George News in 2017. Jeff is a longtime journalist and high school teacher. He and his wife Penny are the parents of five daughters. They also have two young grandsons. Jeff and his family enjoy swimming, camping, sightseeing, reading and taking photos.