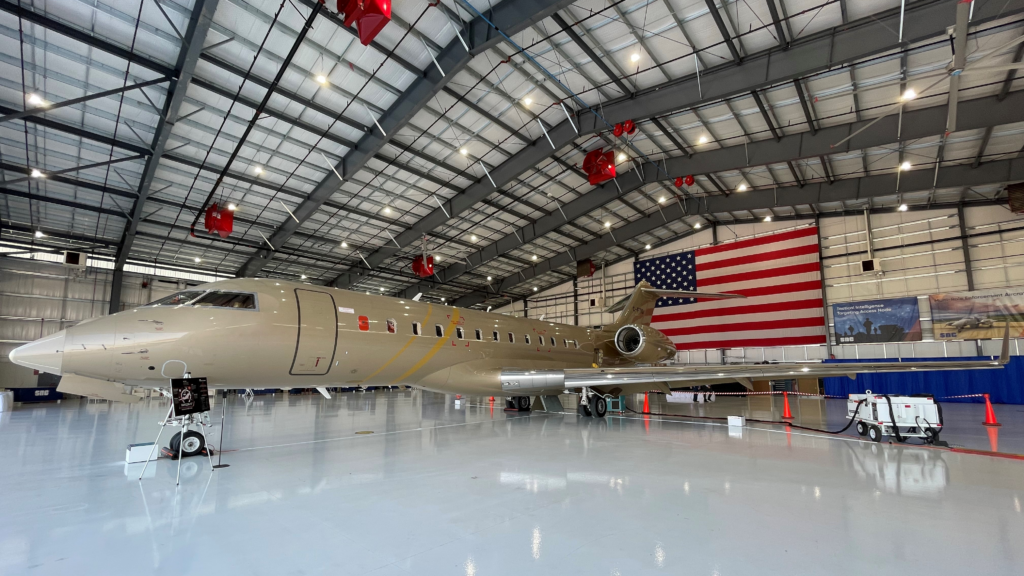 HAGERSTOWN, Md. — As the Army considers how to replace its aging fixed-wing ISR fleet, Sierra Nevada Corp. believes it has already found the answer in its new RAPCON-X aircraft design. And the company plans to go all out, investing $200 million in internal funding to build two prototypes by January 2024, according to company executives.

The Army is currently evaluating whether to move forward with a record-breaking program for a High Accuracy Detection and Exploitation System (HADES) aircraft, a jet aircraft that will replace the aging Beechcraft RC-12 Guardrail as the first platform. -fixed-wing form of service. for the intelligence, surveillance and reconnaissance mission.

Sierra Nevada Corp. intends to be ready with its solution if that happens, said Tim Harper, senior director of business development for SNC’s Mission Solutions and Technologies division. Harper’s comments came during a trip Wednesday to the company’s facility in Hagerstown, Maryland, where reporters toured a “representative” version of RAPCON-X.

Work on the RAPCON-X aircraft began a year ago, “with the goal of building something the military and the DoD need before they need it,” he said.

“The way we designed it is going to be quickly configurable,” Harper said. “Instead of being tied to a specific system and then the military changes something…and they have to come back and it takes about a year to redesign it, we can step in and change it on the fly.”

The RAPCON-X begins with a Bombardier Global 6500 commercial business jet, which SNC then shapes to accommodate a radar and signals intelligence package of the customer’s choice. The military-specific modifications are all developed using model-based systems engineering with an open architecture design intended to accommodate any sensor the user needs to accomplish the mission.

The illustrative model that Breaking Defense and others explored was a Bombardier-owned Global 6500 configured for testing, with wiring visible and much of its interiors dismantled. Towards the rear of the aircraft were mock-ups of four mission stations and a computer station for the mission commander, although Harper noted that these were not representative of the mission stations that will be installed in the prototype. of plane. And although they won’t be installed inside the model plane on Wednesday, future RAPCON-X prototypes will also be equipped with docking stations to allow crew rest during long missions, a kitchen and toilets.

The first Global 6500 to be prototyped is expected to be delivered to SNC in October, after which it “will go straight to paint and we’ll begin integration,” Harper said. The second plane will arrive in December and flight tests will begin next summer.

According to an SNC spec sheet, the RAPCON-X will have a range of approximately 14 hours, a range of more than 6,000 nautical miles, and will operate at altitudes above 45,000 feet.

Beyond the U.S. market, SNC is exploring the prospect of international sales, as well as providing contractor-owned and contractor-operated ISR services for countries that cannot source their own aircraft, said Harper. In total, the company estimates that there is a market for the sale of more than 20 RAPCON-X aircraft.

The army takes a step forward on HADES

The timeline, at least for the military, is somewhat uncertain. In In an interview with FedScoop in June, Dennis Teefy, the Army’s senior manager for the HADES program, declined to comment on when the service might award future HADES contracts or begin fielding the technology.

But despite the silence from Army leaders, the service appears to be stepping up several efforts that could fuel a record-breaking HADES program. Most recently, on August 23, the service issued an RFI for three HADES prototypes to be built with government-supplied aircraft and sensors.

The military is seeking industry feedback on the cost and timing of two different integration approaches currently under consideration, RFI says. One option is for the government to supply a “green plane” straight from a commercial production line, which the company would have to shape to add underbelly radar and ELINT sensor “cheeks.” The other option is to provide the contractor with a commercial derivative aircraft whose airframe has already been modified to allow radar and sensor integration.

“HADES Prototyping will be two systems with different detection systems,” the military said in its RFI. “Once integrated and tested, a user evaluation will be conducted for 6 months of operational use in real-world missions. The systems will be able to perform these missions at the start of operational evaluation.

The military has also started working on prototype sensors that could eventually equip the HADES aircraft. In June 2021, the Army awarded contracts to Raytheon and L3Harris for the “first phase” of a multi-domain sensing system to develop, build, and demonstrate prototype Electronic Intelligence Sensors (ELINTs) and communications intelligence (COMINT). Future phases of the effort will involve further developing the sensor package and preparing it for integration on the HADES aircraft.

At the same time, the sthe service continues flights of two testbed aircraft – the ARTEMIS aircraft from Leidos and the Ares system from L3Harris – which could shed light on HADES requirements. Ares deployed to the Indo-Pacific on April 18 logged 130 flight hours while performing local missions in mid-May, Defense News reported in June.

Meanwhile, ARTEMIS made headlines in the weeks leading up to Russia’s invasion of Ukraine, when the plane was frequently seen flying in Polish airspace, where its sensors could throw a look at Belarus as well as Kaliningrad in Russia. enclave.