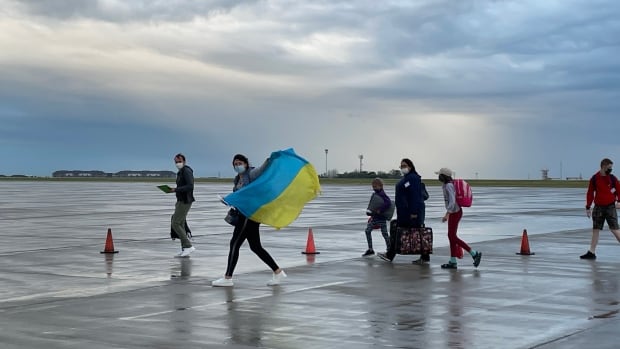 On Monday night, 230 displaced Ukrainians got off a plane at Regina International Airport and embarked on their new lives in Canada.

The plane, which flew directly from Warsaw, Poland, carried people displaced from their homes during the Russian invasion of Ukraine.

“It really is a proud day,” said MPP Terry Dennis, Legislative Secretary responsible for Saskatchewan-Ukraine Relations, at the airport.

“It’s been a long time. We’ve had one or two [flights] redirected and it finally came to fruition.”

The huge Boeing 787 was piloted by the plane’s owner and founder of the NGO Solidaire, Argentinian philanthropist Enrique Pineyro.

Over the next few days, all newcomers will be referred to housing, language training and possibly employment services.

The Ukrainian Canadian Congress of Saskatchewan has been working on the logistics of newcomer services for several months.

Congresswoman Elena Krueger told CBC Radio The morning edition that 100 of the people on the plane were children.

“I tried to put myself in the shoes of their parents and those mothers on the plane and think about how they must have felt,” Krueger said.

“Anticipation and maybe even a bit of apprehension – what will it be like to live in this new country? But also a feeling, I’m sure, of relief to be somewhere sure.”

For now, everyone on the flight is being housed in dormitories at the University of Regina. Once their basic needs have been met, new arrivals should be placed in towns and villages across the province.

Krueger noted that more than 13% of Saskatchewan’s population is estimated to be of Ukrainian ancestry.

Anti-war icon on board

She carried with her a message of peace.

The anti-war icon and Canadian citizen traveled from Toronto to join the flight. His image covered the side of the plane, along with the words “No War”.

She said she met a nine-year-old Ukrainian girl on the flight.

Kim Phuc said she thinks Canada will be a welcoming and kind home for the Ukrainians she travels with.

The morning after their long flight to Regina, Ukrainian families could be seen around the University of Regina dorms. Children played while their parents picked up lunch boxes.

A mother of two from western Ukraine said she was happy to be in Canada. She said the bombs and air raid alarms were hard on her and her sons, so they fled Ukraine to Poland and then to Saskatchewan.

“When there was this Canada-Ukraine authorization for emergency travel, we decided to take advantage of it…to look for a safe place here,” said Natalia Moroz. “They are all very hospitable people, and so this is the place away from this war and away from Russia.”

Moroz says she hopes to settle permanently in Regina or Saskatoon.

Serhii Storozhenko, who arrived on the plane with his wife and three children, says his arrival in Canada was bittersweet.

“We have two emotions,” he said. “First of all, a very sad situation. Of course, we are moving away from our family, from our friends. So another part is, I think, happier because we believe [we have] hope for a good life.”

Next, Storozhenko wants to focus on finding a job and housing for his family.

The Ukrainian Canadian Co-op in Regina, which was opened in 1937 by Ukrainian immigrants, is already preparing to hire some of the newcomers.

“This store has always had strong ties to the Ukrainian community. That’s why it’s here,” said general manager Carin Rodgers.

“I was quite ecstatic and very happy to hear that it’s finally going to happen here and people are finally coming.”

Meanwhile, the Regina Open Door Society said it plans to help newcomers like all other newcomers it works with, by providing language training and employment services.

While the company said it was important to financially support groups like the Ukrainian Congress, a spokesperson said it was even more important for people to reach out to newcomers themselves.

“If you have a new neighbor from Ukraine or your kids have a new classmate, get to know them and listen to their stories,” spokeswoman Victoria Flores said.

“Make sure they feel like it’s their new home. We welcome neighbors.”