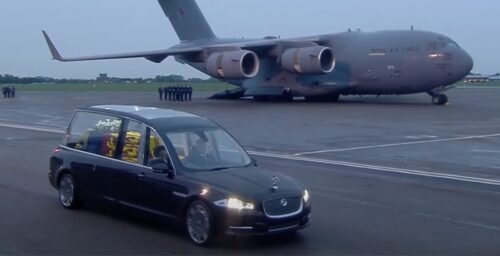 The plane that carried the Queen’s coffin has broken records for the most watched flight in history.

According to tracking website Flightradar24, in the first minute the Royal Air Force (RAF) plane was in the air on Tuesday, “an unprecedented number of six million people attempted to follow the flight”.

The crazy number of people trying to track the flight caused site disruption, so Flightradar24 says it has started limiting the number of added users.

During the plane’s journey from Edinburgh to RAF Northolt, 4.79 million people watched part of the flight and Flightradar24 handled 76.2 million flight-related queries.

“70 years after her maiden flight as Queen aboard BOAC Argonaut ‘Atalanta’, Queen Elizabeth II’s final flight is the most watched flight in Flightradar24’s history,” the site tweeted on September 13.

70 years after her maiden flight as Queen aboard the BOAC Argonaut “Atalanta”, Queen Elizabeth II’s final flight is the most watched flight in Flightradar24 history.

That beats the previous record set last month by a plane carrying U.S. House Speaker Nancy Pelosi to Taipei, Taiwan. This flight was watched by about 2.2 million people.

Overall, five million people tuned in to the Queen’s latest flight on Flightradar24’s website, mobile app and live stream, making it the most watched flight of all time.

The site says it will likely remain number one for some time.

Since the Queen’s coffin landed in London, it was sent to Buckingham Palace and then escorted to the Palace of Westminster.

There, the Queen will rest in state until her funeral on Monday, September 19, which will take place at Westminster Abbey.

Canada has declared the day of the funeral a federal holiday. However, provinces such as British Columbia, Quebec and Ontario do not have a day off.