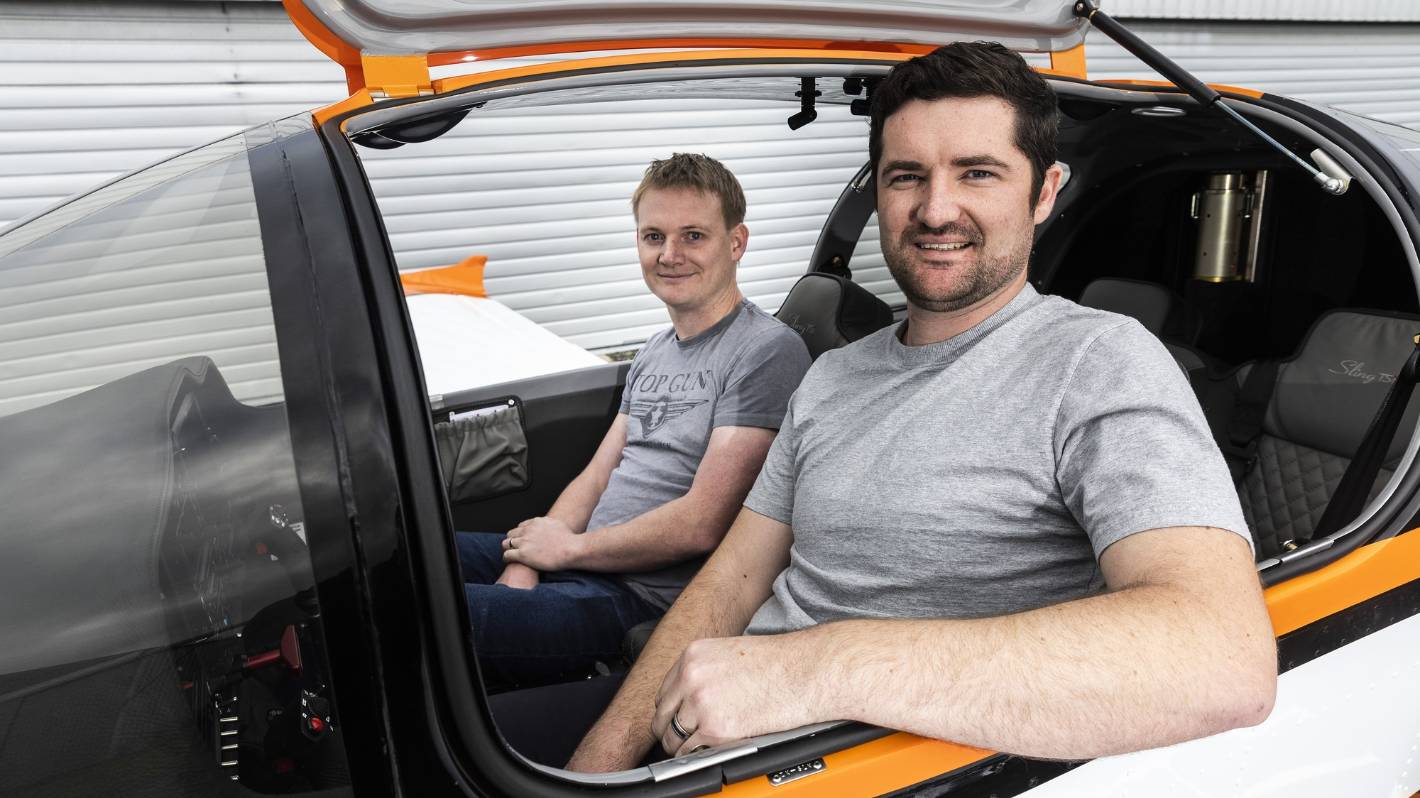 Manawatū men who built their own plane

Two years ago, when most people were at home trying new recipes and streaming movies during the Covid-19 lockdown, two Manawatū men hatched a plan to build an airplane out of the House.

For private pilots Brad Pearpoint and Alex Kaandorp, who wanted a small plane to go on vacation with their family, the easiest solution was a home-built plane.

The duo made a four-seat slingshot plane with a modern design and adequate safety features to fly their family at any time for a cost of just $150 per hour.

It took them two years to build the Sling TSi model airplane, which their kids named “Nemo” after Disney’s adventurous young clownfish.

After getting their pilot’s license in 2018, Pearpoint and Kaandorp used to charter small planes for family vacations.

But the rent was high and buying an old plane would require a lot of maintenance, so they decided to buy an assembly kit and build one themselves.

Pearpoint, who lived in Palmerston North, said building a plane from home was an easier way to get a shiny new plane for his family.

“When we found out how expensive it was to lease other people’s planes, we thought our own plane would be cheaper, so we built our own plane instead of buying one.”

Kaandorp, a resident of Feilding, said he never thought he could build an aircraft of this caliber.

“It’s a very nice plane with a modern technology engine.”

He said the assembly kit came in the form of a large box of parts and it was as easy as assembling Lego or Meccano.

“There are videos online to help you build an airplane, and the kit comes with a full step-by-step manual.

All it took was time, effort and perseverance, he said.

“Every weekend for the past two years has been spent building the plane. It’s a big sacrifice because we both have families and full-time jobs.

“[The] the kids suggested a lot of designs, but we finalized a design with orange Lamborghini because it stands out.

The plane had a maximum speed of 300 km/h and consumed about 22 liters of fuel per hour.

Pearpoint, who also owns an IT company, said having a plane gave them the freedom to go on vacation anytime they wanted.

“If the weather is good and you feel like going to Queenstown, get on your plane and go.

“You’re not limited to the airline schedule and [don’t have to go through] airport security checks.

“There is no direct flight from here to Queenstown so you will have to fly [via] Wellington, Auckland or Christchurch. For a family of four, a private plane ride is definitely cheaper and faster.

The duo said the plane was fuel efficient, leaving less carbon footprints than traveling by car.

Kaandorp said the plane’s modern engine makes it a greener mode of transportation.

“Many old planes use lead-based fuels which are not good for the environment. This plane probably runs on the same fuel you use in your car.

“The amount of fuel we burn per kilometer is significantly lower. The plane burns about 22L per hour and we are traveling at 300km/h. It is much less than a vehicle.

The plane could land on any sealed runway at any airport, on grass and hard sand beaches.

Parking at any airport costs less than $20 a day, less than parking fees for a car.

However, keeping the aircraft in a hangar at Feilding Airfield cost around $200 a month.

The aircraft testing and verification process was almost complete, with the aircraft undergoing a test phase at the airfield.

“As soon as the test flight is over the first thing would be to fly locally with our families and then we have a long list of people [friends] who want to fly with us.

“It’s perfect timing with the arrival of spring.”

2022-09-30
Previous Post: Body, majority of wreckage recovered from Whidbey Island plane crash
Next Post: Private plane and police escort for his last show in the country