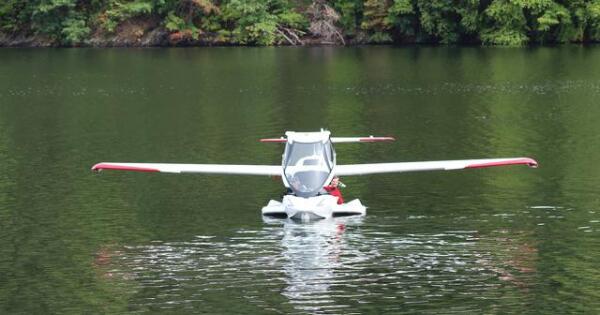 Local first responders were dispatched on an unusual morning when a light aircraft had to land on Lillinonah Lake.

Fortunately, the call had a fairly quick and very good ending.

Newtown Hook & Ladder and Newtown Underwater Search & Rescue (NUSAR) were dispatched at approximately 11:45 a.m. on Friday September 30 to the Newtown town boat launch at the end of Hanover Road, after the pilot of a small plane.

The pilot reported that he was in a pontoon plane and was low on fuel, so he was going to land on water. There are no casualties.

FAA records show that the aircraft was an Icon Aircraft A5 single-engine fixed-wing. The model is an amphibious light sport aircraft.

Assistant Hook & Ladder Chief Ray Corbo was joined by firefighter Jason Rivera to initially respond to the boat launch. The two were able to get in touch with the pilot and a female passenger, who both said they were fine. Corbo was the commanding officer during the incident.

The pilot told firefighters he enjoyed “splash and fly” when he realized how low on fuel he was. He was based at Danbury, he said, and planned to return to that base once refueling had been completed.

The pilot had enough fuel to keep the aircraft idling in the water. He sailed to the town’s boat launch dock, getting close enough that he could easily communicate with the two firefighters without shouting. With nothing else on the water at this hour, it was a smooth ride for the plane and its two occupants.

Before the boat from Hook & Ladder arrived, a nearby resident with a boat was able to help. The neighbor, who declined to be named, drove his boat to the dock where Corbo and Rivera were waiting. He picked up Rivera and the two carried some of the gas needed to refuel the plane to the waiting pilot and passenger.

Additional Hook & Ladder personnel also arrived, towing the company boat, but did not need to use the equipment. NUSAR personnel responded to the call, but were told to remain at their post.

Within minutes, the aircraft was refueled. Rivera and the boater got out of the plane, and he was able to board. With a northeasterly heading, the Icon cleared the dock and out of the area less than 30 minutes after its unscheduled landing.

Managing Editor Shannon Hicks can be reached at [email protected]

A pilot and a passenger made an unexpected landing on Lillinonah Lake on September 30. The light sport amphibious aircraft ran out of fuel and used the Newtown waterway for a safe landing. —Pictures of Bees, Hicks

Hook & Ladder Firefighter Jason Rivera, right, was led into a boat by an unnamed neighbor, who helped refuel the plane.

It only took a few minutes for the amphibious plane to refuel and begin its return to Danbury.