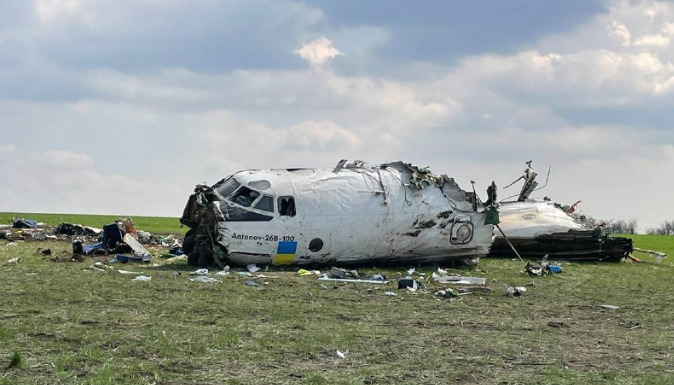 The ‘An-26’ crashed during a “technical flight”, killing one person and injuring two.

UPDATE 11:11 PM (April 22) – MORE information has emerged regarding the Ukrainian military transport plane which crashed near Zaporizhzhia, Ukraine at around 9am (local time) on Friday, April 22.

According to an investigation launched following the accident, it was revealed that the incident was caused by fog and low altitude, which caused the plane to strike high voltage power lines.

A statement from the Zaporizhzhia Oblast State Administration revealed that there were only three people on board the plane at the time of the crash. The aircraft’s flight engineer died while the other two crew members were taken to hospital with serious injuries.

After the accident, law enforcement agencies opened a criminal investigation for violation of traffic safety rules or operation of air transport (part 3 of article 276 of the Criminal Code of Ukraine). The penalty for violating these rules carries a prison term of five to ten years, as reported hromadske.ua.

Video of the scene – featuring ZOVA spokesman Ivan Arefiev – and three other photos have been posted to the crash site.

UPDATE: 1:41 p.m. (April 22) – THE first photo of the crash site of a Ukrainian military plane has been published. The plane crashed near Zaporizhzhia, Ukraine at around 9 a.m. (local time) on Friday April 22.

The photo was shared by the Zaporizhzhia Regional military administration. It shows the front half of the Antonov An-26 with a damaged nose and the plane completely split in two. Airplane wreckage is strewn across the grass.

Prior to the Ukrainian plane crash, reports from the Ukrainian military suggested that they had succeeded in destroying 15 Russian air targets.

“April 21 is a truly successful day for Ukrainian air defenses, as 15 air targets were destroyed at the same time,” a statement read.

UPDATE 11:01 am (April 22) – Multiple casualties have been reported after a Ukrainian military transport plane crashed near Zaporizhzhia, Ukraine at around 9 a.m. (local time) on Friday, April 22.

In an update released by the regional military administration, it was revealed that one person was killed as a result of the accident and two others were injured. It is unclear at this time whether these numbers are likely to increase.

A statement from the Zaporizhzhia Regional military administration said: “Today at 09:00 in the Mikhailovka region of the Zaporizhzhia region, the AN-26 plane, which according to preliminary information belonged to Ukraine, crashed.

“The plane was performing a technical flight. It is currently known that one person was killed and two others injured. The number of crew members and the reasons for the crash are being clarified.

“According to preliminary and unconfirmed information, the plane hit a power pole, as a result of which the engine caught fire. The SES and relevant organizations are working on the scene. ”

ORGINAL 10:19 (April 22) – A UKRAINIAN military transport plane crashes in southern Ukraine, believed to be nearby Zaporijzhia, according to local authorities on Friday, April 22.

The ‘An-26’ reportedly crashed into the Volnyansky district, in the Zaporizhzhia region, during a “technical flight”.

The regional military administration reportedly confirmed that there had been casualties.

A statement from Zaporizhzhia Regional Military Administration said: “An An-26 plane crashed today in Vilnianskyi district of Zaporizhzhya region. The aircraft was performing a technical flight. There were victims. The circumstances are under investigation. More details to follow.

The Antonov An-26 (NATO name: Curl) is a twin-engine turboprop civil and military transport aircraft, designed and produced in the Soviet Union from 1969 to 1986.

The Zaporizhzhia region has been subjected to numerous attacks by Russian forces since the start of the invasion on February 24.

Thank you for taking the time to read this article, don’t forget to come back and check it out The weekly euro news website for all your up-to-date local and international news and remember, you can also follow us on Facebook and instagram.

2022-04-22
Previous Post: Pilot in formation before a small plane crashes in Covington
Next Post: Discover the X-59: the supersonic aircraft that could change everything