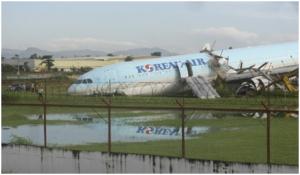 
A Korean Air passenger plane with 162 passengers on board veered off the runway at Cebu International Airport in the Philippines on October 23. Korean Air said no one was injured in the crash, which was caused by a brake system failure.

Korean Air flight KE631 veered off the runway, overshot and came to a stop in the bushes at the airport at 11:07 p.m. on October 23 (local time), Korea’s Ministry of Land, Infrastructure and Transport said on October 24.

The aircraft landed normally on the runway. But he couldn’t slow down and stopped about 250 meters from the end of the runway.

Philippine aviation authorities and Korea’s Ministry of Land, Infrastructure and Transportation say the airliner’s braking system is likely to blame and are investigating the causes of the crash.

Meanwhile, with the runway at Cebu airport closed, flights between Incheon and Cebu have been suspended. Philippine airport authorities have extended the closing time of the runway at Cebu Mactan Airport to 5 p.m. About 100 passengers due to return to Incheon International Airport on a Korean Air flight were unable to return home and are waiting in the Philippines. Jeju Air and Jin Air also found that 177 and 156 passengers were unable to return home due to the runway closure, respectively.

2022-10-25
Previous Post: EasyJet plane comes within 10ft of drone in ‘close encounter’ | UK News
Next Post: HERMANTOWN: the first results published by the NTSB after a fatal plane crash