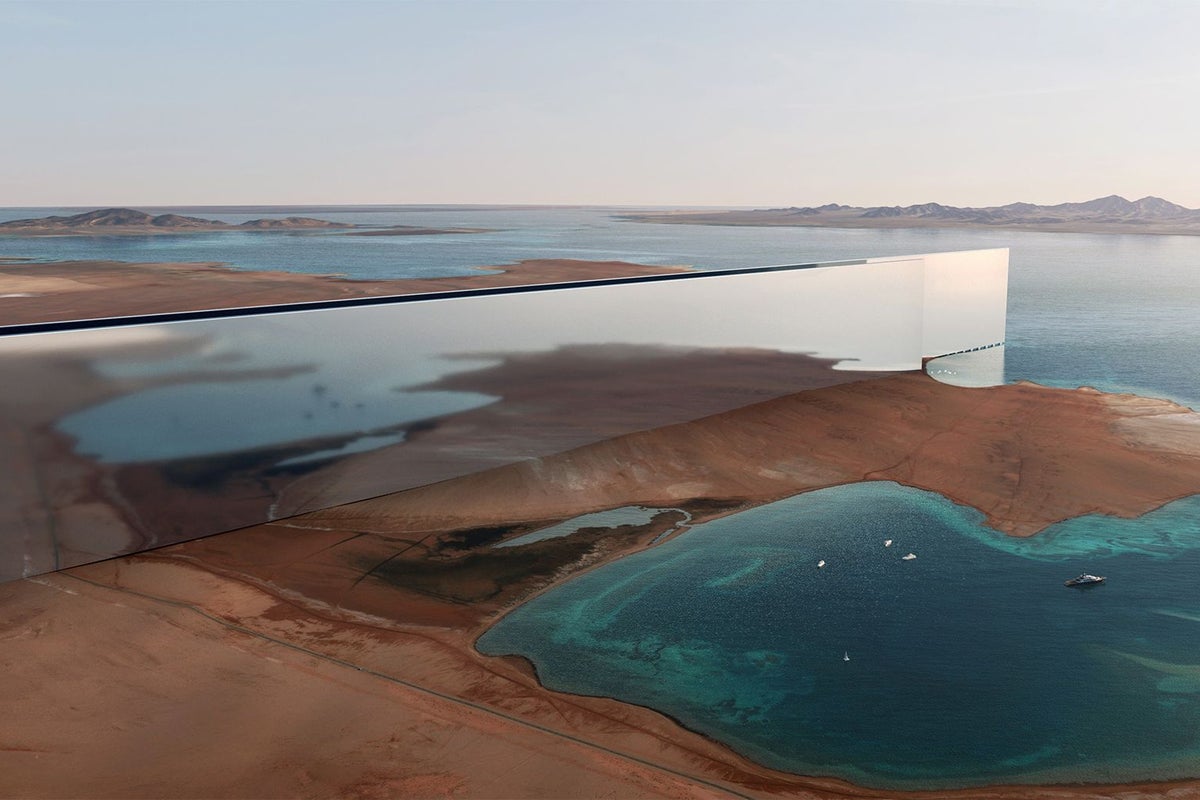 It’s a bird, not a plane, it’s… a scraper? Saudis innovate in the desert metropolis

New drone footage released by Ot Sky shows the inauguration of the new structure in the Saudi megacity dubbed The Mirror Line.

The line is part of the Neom development, which is an ambitious project to change the future of Saudi Arabia to become a world leader in innovation and technology, and less dependent on oil.

What happened: In the video, there is a bird’s eye view of a fleet of loaders, excavators and heavy trucks that can be seen digging in the desert, preparing a foundation for The Line.

The construction site also reveals an underground transportation system that would have an underground high-speed train that can travel from one end to the other in twenty minutes.

This horizontal city will need a 75-mile-long trench to fit its 1,600-foot-tall mirror-like twin walls, which will cost around $1 trillion to complete.

Saudi Crown Prince Mohammad bin Salmanwho is also chairman of NEOM’s board of directors, unveiled the designs in mid-summer with an ambitious goal of completing construction by 2030. “Neom will be a place where all people around the world can leave their brand to the world in a creative and innovative way,” bin Salman said.

This self-contained paradise is said to be home to up to 5 million people, is powered by renewable energy and stretches to the coast of the Gulf of Aqaba.

You can watch the video below to see the start of The Mirror Line:

The 75-mile-long scraper will include:

Criticisms: According to the human rights organization ALQST, they reported that three men forcibly evicted from the Neom site in Saudi Arabia have been sentenced to death. The three Huwaitat tribesmen were sentenced after they were forcibly removed from the site of the mega project.

Moreover, there have been doubts about the completion of the project, as the Saudis have already abandoned other projects, such as the mile-tall skyscraper. In addition, many engineers and architects question the durability and completion date of the side scraper, with experts remaining skeptical about the reality of the project.

Marshal Browndirector of the Princeton Urban Imagination Center and associate professor of architecture at Princeton University, said, “There would be so many physical and environmental phenomena to deal with to achieve the incredible minimalism and singularity that the renderings offer.”

2022-10-21
Previous Post: Snake on plane causes panic on US flight, Samuel L Jackson nowhere to be found
Next Post: Charissa Thompson Opens Up About Sexting On A Plane – OutKick