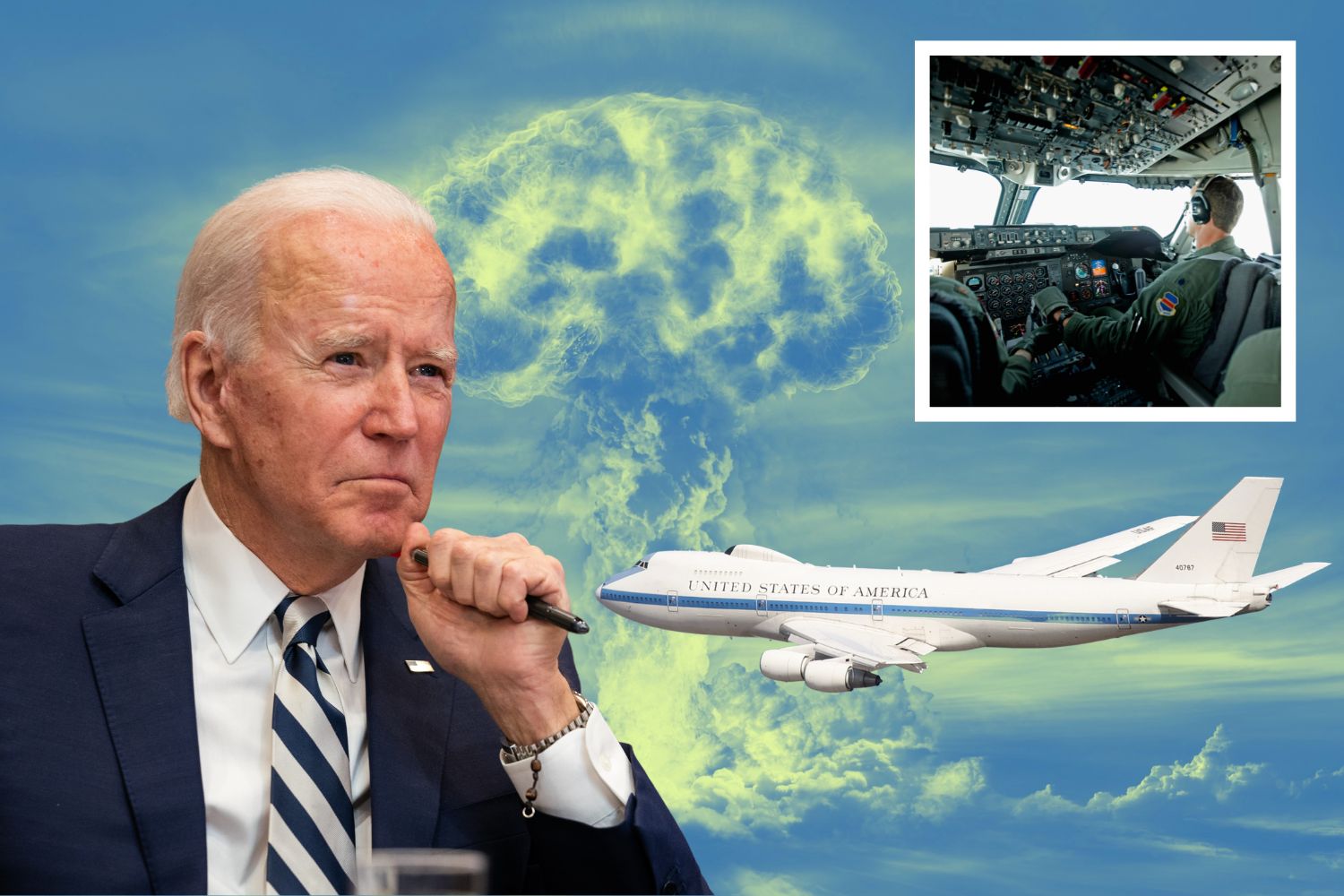 As tensions between Washington and Moscow and Beijing remain high – over Ukraine and Taiwan respectively – there are growing fears that nuclear weapons could be deployed for the first time since 1945.

Russia poses an “acute” threat to the United States, including via nuclear weapons, according to a recent Pentagon report.

If the continental United States is threatened, President Biden and other top officials could board one of four ‘doomsday planes’, designed to serve as mobile command and control posts in the event of war. nuclear.

What is a “plane of the end of the world”?

The aircraft, officially known as the Boeing E-4B Advanced Airborne Command Post (AACP), is a modified version of the Boeing 747-200 in service with the US Air Force.

According to the Air Force, it was created to provide “a highly resilient command, control and communications center”, in the event of a “national emergency” or the destruction of ground command centers.

The AACP E-4B is designed to withstand an electromagnetic pulse and for this reason has no windows except in the cockpit. It comes with “shielding against nuclear and thermal effects” and has a range of communications equipment, including access to the US military’s ultra-secure Milstar satellite system.

It first entered service in the 1970s, although three of the aircraft were initially less technologically advanced E-4A AACPs before being upgraded to E-4Bs in the early 1980s.

There is at least one E-4B AACP on standby at all times. Development of a replacement, called the Survivable Airborne Operations Center, began in 2021, although it was still in the “very early stages of development” as of early 2022.

According to a report by Business Intern.

Each AACP E-4B can accommodate up to 112 people, with the aircraft spread over three levels. The middle tier functions as a command center that can be used by the president and other senior officials to coordinate the US response to a nuclear attack. According to the Air Force, it is divided into six sections, consisting of: “A command work area, a conference room, a briefing room, an operations team work area, an area of communication and a rest area.”

The conference room is soundproofed and equipped with video display screens, while there are 14 berths across the plane for sleeping. Most of the operations teams are stationed at the rear of the E-4B AACP.

In 2017, David Rennie, journalist at The Economistwas allowed to tour one of the planes and said the interior had a retro look, although large pieces remained “prohibited”.

Describing the plane’s interior, he said: “It has a distinctly retro, late Cold War feel, from the secretary’s padded leather swivel seats, which wouldn’t put a Bond villain to shame, to the urinals bolted to bathroom walls.”

He noted that these “drain directly into the sky, to avoid filling up septic tanks on long flights”.

Why are “doomsday planes” so valuable?

Newsweek spoke to a number of nuclear warfare experts who explained why the E-4B AACPs are so important to US security.

Scott D. Sagan, a Stanford University professor who has written a number of books on nuclear warfare and strategy, argued that E-4B AACPs make it less likely that a hostile power will launch a nuclear first strike. .

He said: “So-called ‘doomsday planes’ are an important part of nuclear deterrence. Maintaining the ability of the President and Secretary of Defense to survive an adversary’s attack against Washington, being aboard a command post aircraft, makes it much less likely that an adversary would believe that a “decapitation” attack on the United States could be successful.”

That view was shared by Dakota Rudesill, an assistant professor at Ohio State University who specializes in nuclear control, who agreed the plane helped deter a nuclear strike on the United States.

Talk to Newsweek he argued, “The E-4Bs are worth it, for reasons of deterrence and first-rate constitutional principles.

“The ability to have our national civilian leadership mobile but still capable of commanding US nuclear forces reduces the likelihood that an adversary can successfully carry out a ‘decapitation’ first strike. This double-boosts deterrence and strategic stability: it reduces the incentives for an adversary to fire first, and reduces the pressure on the United States to fire first or lose national leadership and therefore the ability to retaliate.”

Rudesill also said the E-4B AACPs would help maintain civilian control over the U.S. military, commenting, “The aircraft also serve the vital constitutional principle of civilian control of the armed forces and the fate of the country. The E-4Bs reinforce the ability of our civilian leaders to maintain control of US nuclear forces, even in the face of an imminent or initiated adversary nuclear attack, and to reduce the pressure to cede launch authority to the military.

“I can think of no more dignified government material than that which allows nuclear arms control and decisions about the survival of the nation to remain in the hands of civilian officials for as long as possible.”