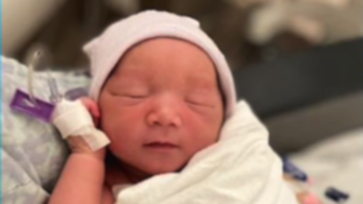 A woman gave birth to a healthy baby in the toilet aboard a Frontier Airlines flightaccording to a Facebook post from the airline.

The passenger went into early labor during the flight from Denver to Orlando, said the post, which was shared on May 17.

Flight attendant Diana Giraldo then helped her to the bathroom and helped deliver the baby.

In a statement, Captain Chris Nye, who was piloting the plane, said the plane diverted to Pensacola Airport in Florida and then continued to Orlando after the mother and baby were able to disembark with help from medical personnel.

“The dispatcher also did a great job suggesting Pensacola airport and getting a gate and paramedics ready for us.

“It was a job well done, and I was happy to see everyone working together to successfully deliver a newborn on an airplane!”

Although the baby’s name and gender have not been shared publicly, Frontier revealed that the newborn’s middle name is Sky due to the unusual conditions of his arrival into the world.

And this little one is not the only child born in the air during the last years.

In May 2021, a woman gave birth on a flight from Salt Lake City to Honolulu.

In this case, however, no stewardess needed to help with the delivery – by a happy coincidence, there was a doctor and three NICU nurses on board, who all took action.

In fact, being born on a plane can sometimes have fun perks.

A baby named Haven, born on a Cebu Pacific flight from Dubai to Manila in 2016, received a million miles by the Philippine airline.

Although she is still too small to use them, the airline said the miles could be shared with her family members.