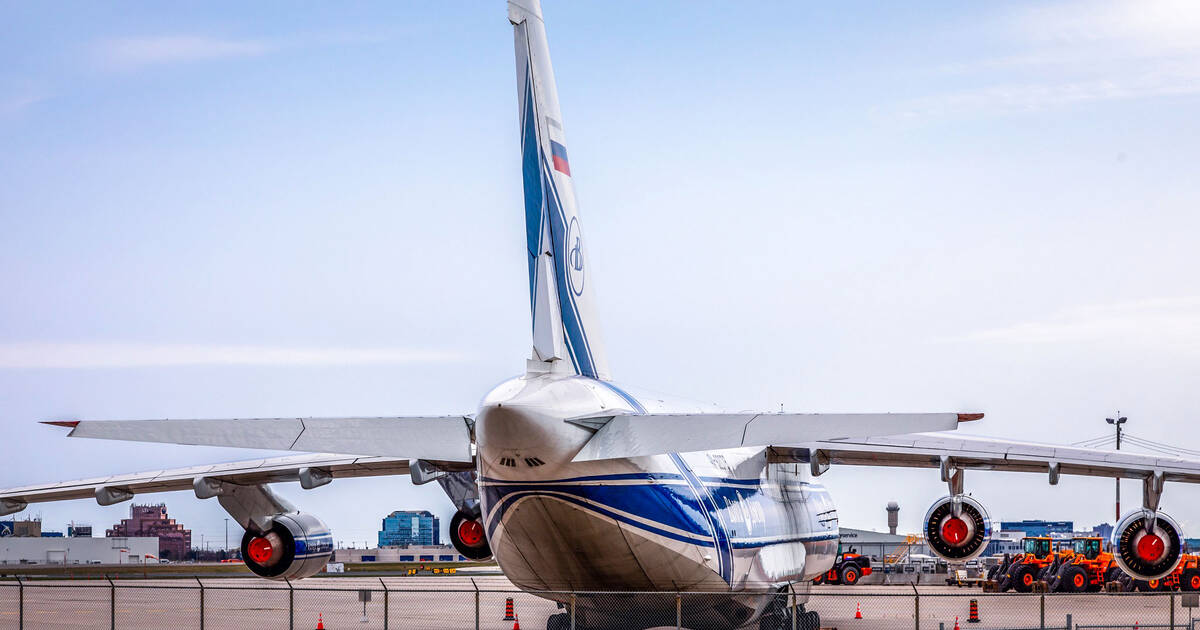 Two months into the Russian invasion of Ukraine, a symbol of the horrors of the ongoing war sits idle on the tarmac at Toronto’s Pearson International Airport.

A gigantic Russian-registered cargo plane has been grounded for days after the unprovoked invasion began, the result of Canadian sanctions that include airspace restrictions prohibiting all aircraft owned, chartered or operated by the Russia or a company/person related to that country using Canadian airspace.

The Antonov An-124 – one of the world’s largest production cargo planes – registered to Volga Dnepr Airlines, was grounded in late February after delivering COVID-19 test kits to Canada via China.

And it doesn’t look like the titan of a plane will be leaving anytime soon as Vladimir Putin doubles down on his war and retaliates against Canadians with his own sanctions.

Location of the Russian cargo plane at Pearson Airport.

Motorists can easily see the Antonov passing on Highway 427, but you can get an even better view if you know where to look.

The plane is located directly off Silver Dart Drive where it crosses under an overpass next to a fuel tank park. This is where you can get closest to this beast of a plane.

There’s nowhere to park legally, and a tow truck station is located directly south of the viewpoint, so the only way to get close to the gargantuan cargo plane without risking towing it is to make the trip treacherous walk via Jetliner Rd.

It’s only about a 700m walk from Airport Rd, but somehow it seems longer.

Once you get past the tank yard and through the underpass, the plane is right there and can easily be photographed through the chain-link fence.

It’s so close you can practically touch it. But that would be a pretty dumb idea and an easy way to end up in a Mississauga police station. So hold it tight. 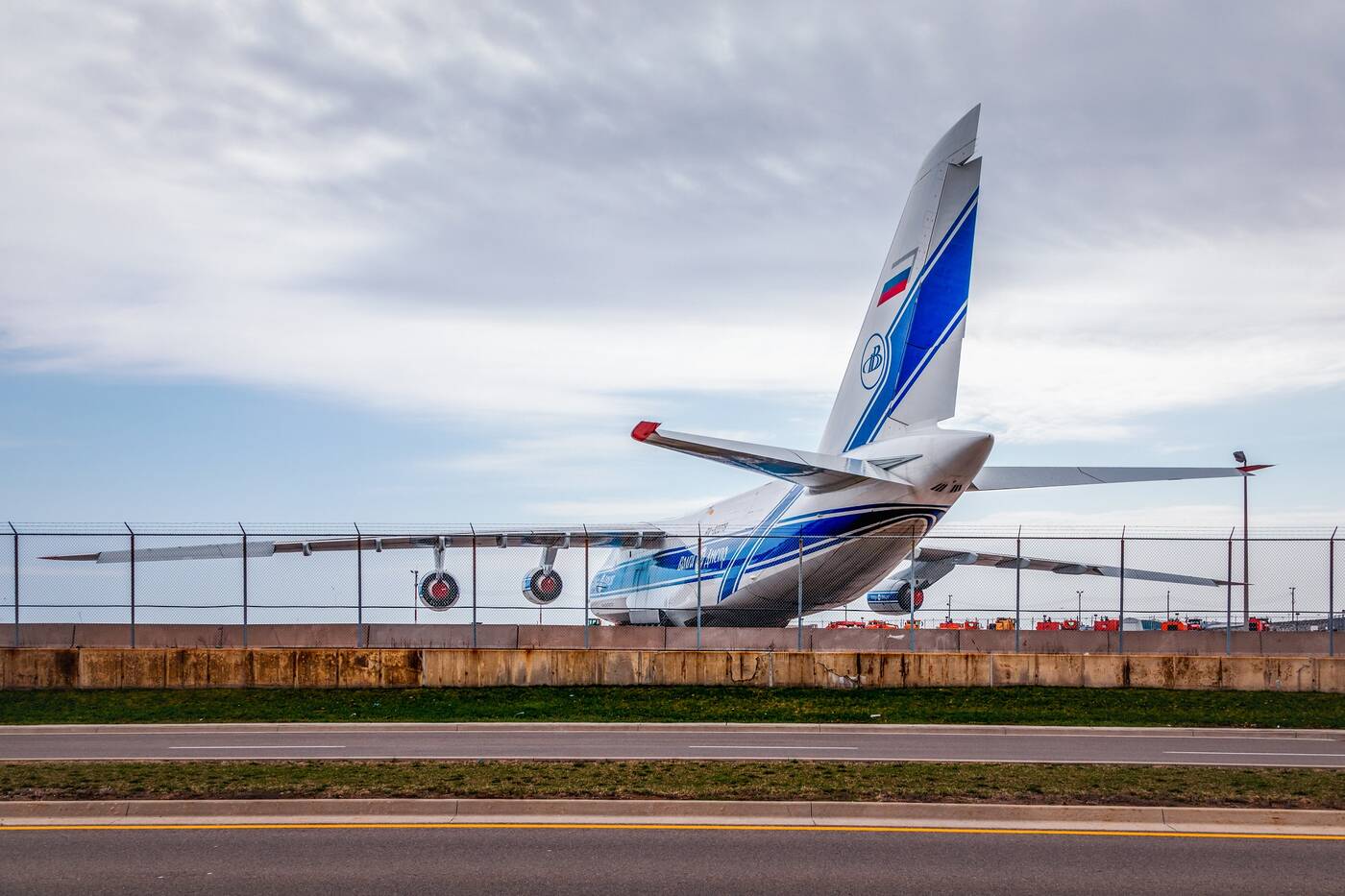 View of the plane from Silver Dart Drive.

Even if you’re just taking a few photos, intrepid photographers may need to explain their presence to any security or law enforcement patrols, as spying around the fences of an international airport could be considered suspicious.

If (like me) your camera lens won’t fit through the ties of the fence, or you want a wider view, there’s a little grassy hill on the north side of Silver Dart Drive that provides a spectacular view of the plane. 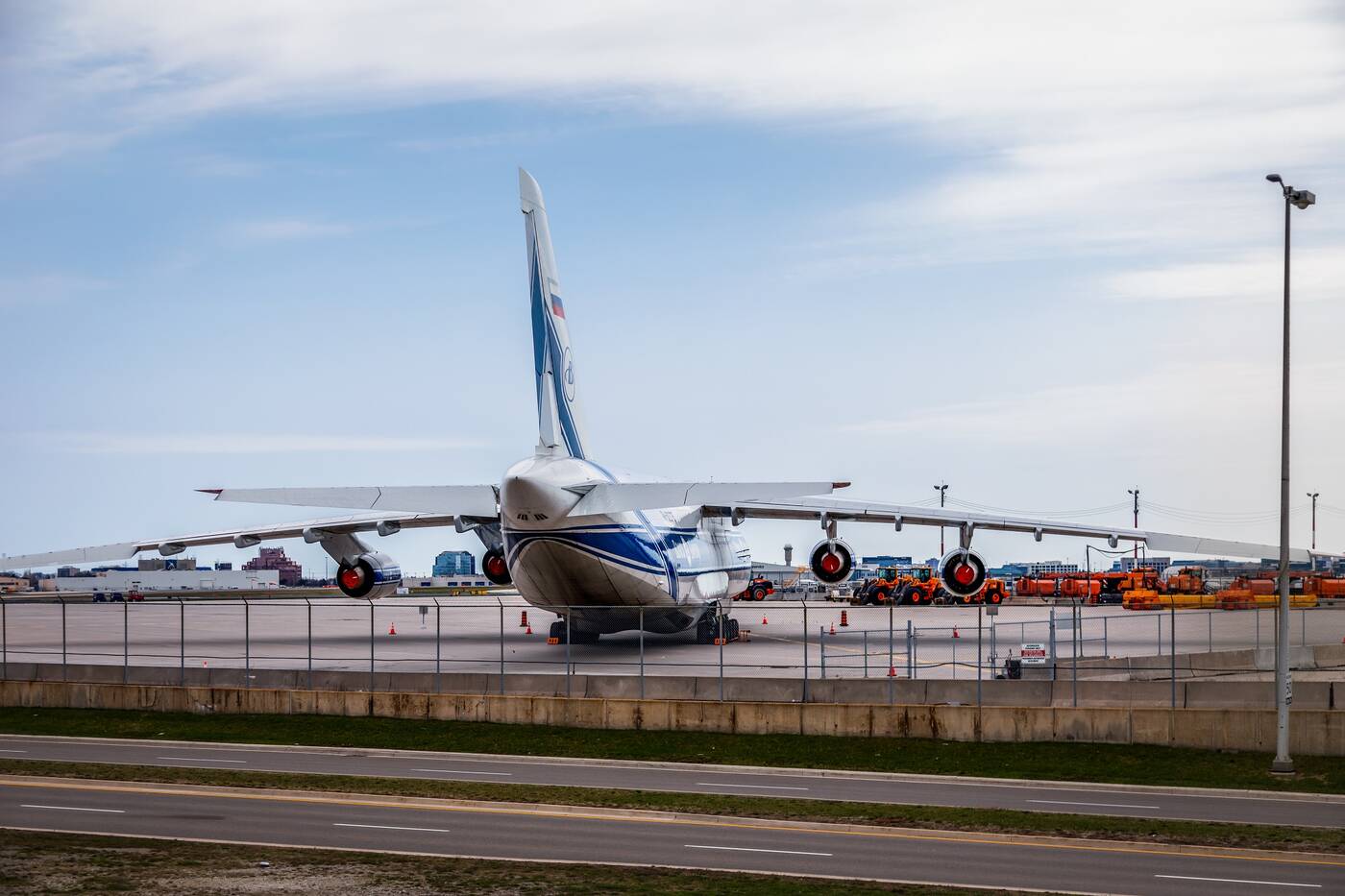 The whole time you may feel like you’re somewhere you’re not supposed to be, but this viewpoint is on a publicly accessible road beyond the security checkpoint of the airport. 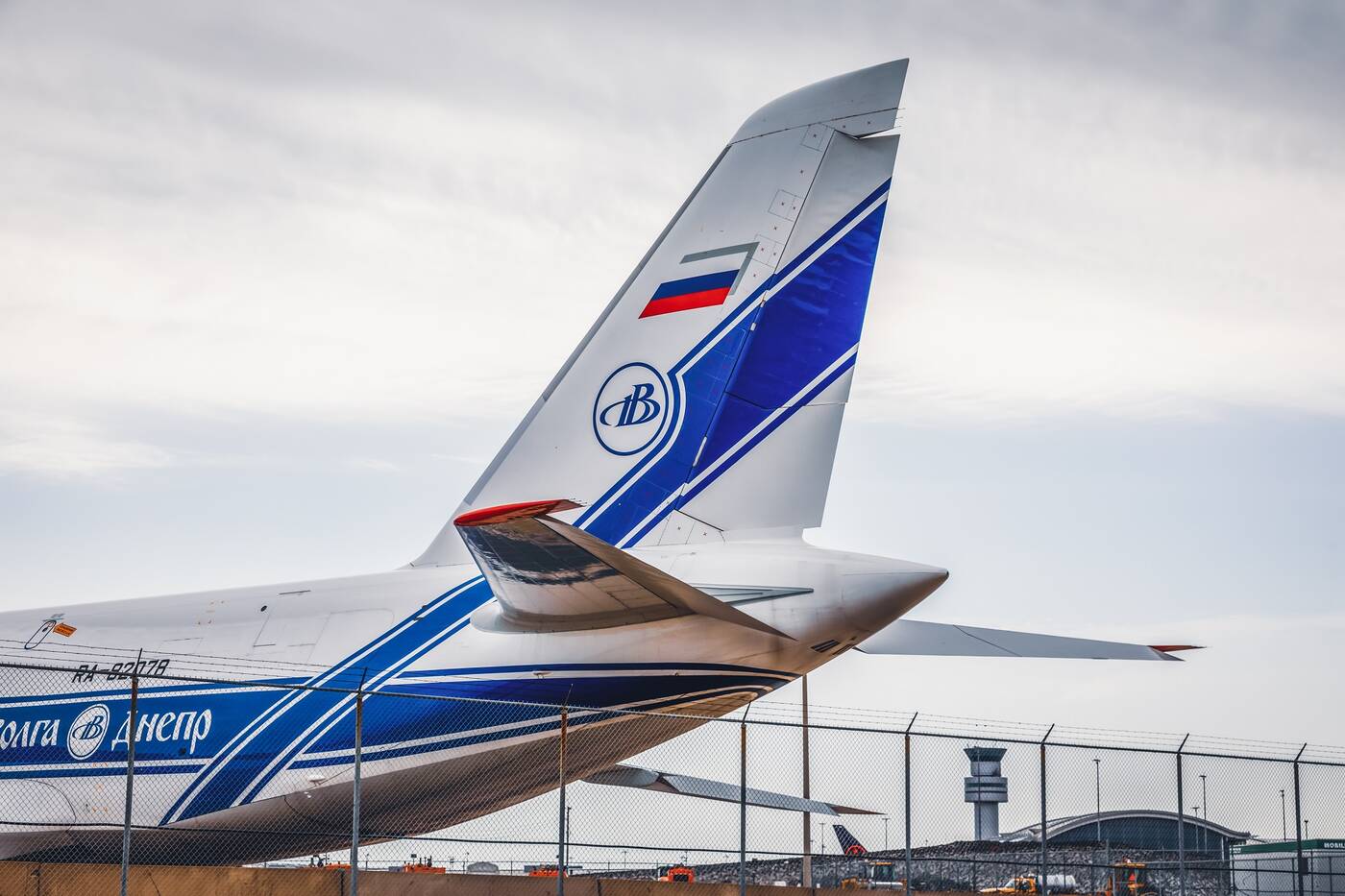 The massive tail bears a Russian flag, juxtaposed with the tail of Air Canada planes and the Pearson control tower.

But there are other ways to view this monster for those who don’t want or can’t make it to the fence.

You can also spot the Mammoth Plane from the upper deck of the Value Park Garage on Viscount Rd, but if you want to park there it will cost you $29, so this location is probably best enjoyed by people with business at the airport. 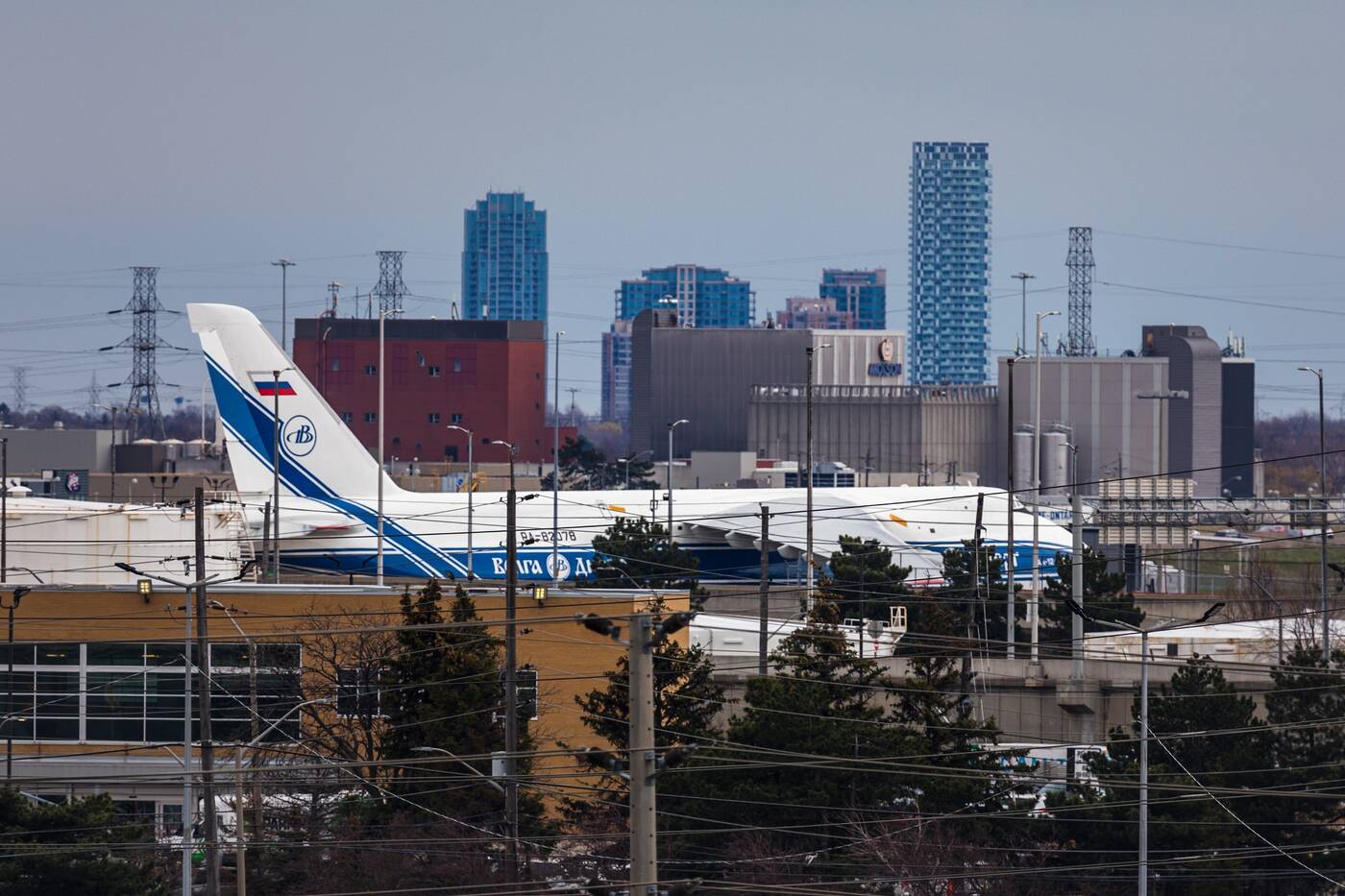 The plane can be seen towering over its surroundings from the upper deck of the Value Park Garage on Viscount Rd.

From there you can hop on the free Link Train (which is relatively meaningless after paying for parking) into the airport for another vantage point.

Pearson passengers or anyone wishing to make the trip can admire the view from N Star Rd serving the upper level of Terminal 1 at the east end of the building.

In a statement provided to The Globe and Mail, Volga-Dnepr said it was considering the “settlement of all formalities to be able to fly to its home base”. But the statement came just days after the plane grounded at Pearson, where it remains at the end of April.