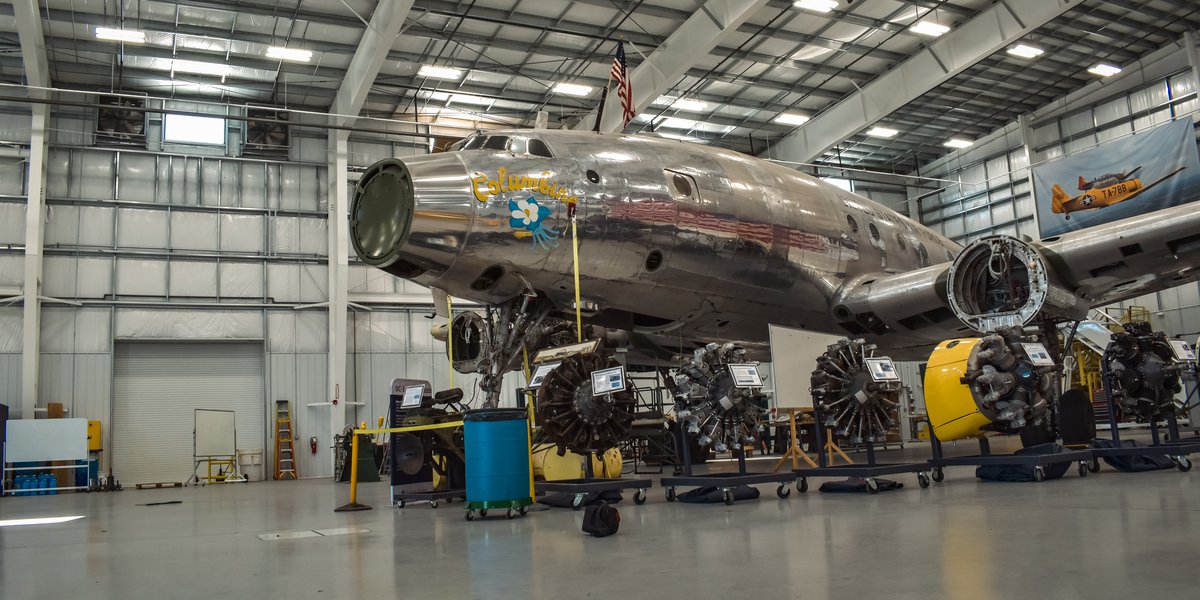 After many years and many flights, the plane was left in the desert to disappear and be lost in history.

That is, until it is taken over by Dynamic Aviation for the preservation and restoration of its former glory.

Everyone knows that Air Force One is the call sign for the President’s plane, but most people don’t know the story of the very first plane to carry that designation, or the people who sat in his seats.

From Dwight D. Eisenhower to Queen Elizabeth II, many personalities have jumped aboard the Columbine and marked its history.

I first heard of the aircraft years ago, and being interested in history, I knew many people affiliated with its history. What I didn’t know was that the plane was in my own backyard.

With gear in one hand and a notepad in the other, I headed over to Dynamic Aviation in Bridgewater to learn more about this historic aircraft.

When I arrived I was greeted by Phil Douglas, who is the executive director of the First Air Force One, and he showed me around the hangar that houses the plane. Walking around planes from different eras in history really makes you appreciate where we are now, but that we shouldn’t forget what came before.

“Our goal is to put it back to the way it was when President Eisenhower had it.” Explained Phil Douglas. “Once we restore him, his home will be right here in Bridgewater, but he will be leaving to attend events everywhere.”

We spent the next two hours talking with many people who work on different parts of the aircraft. I could tell everyone was passionate about the plane, and they shared many interesting facts about the history and design of the plane with me.

As someone interested in history and aviation, I enjoyed every second of it. It’s not often you get to walk around a plane that had so many well-known characters on it, or touch the same controls and buttons they would have.

There was even a time when I was able to walk around the plane on my own and soak up the history and engineering that brought the plane to life.

So many innovations were made during the Columbine’s lifetime, and there aren’t many historic aircraft left in the world.

It’s clear to me that the plane will receive the love and work it needs to return to its former glory, and everyone, including myself, is thrilled to see the plane take flight once again. more to serve a new purpose.

Dynamic Aviation is accept donations to go to aircraft catering, and you can read more about Dynamic aviation here.