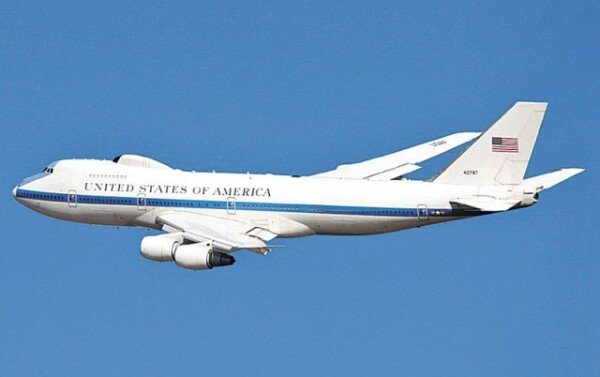 As US President Joe Biden headed for South Korea, the E-4B, dubbed the National Nuclear Airborne Operations Center, was deployed to Kadena Air Base in Okinawa, Japan.

When the US President travels abroad, an E-4B aircraft is usually deployed on standby in a visiting country or nearby region. However, this is a rare occasion where its flight route and destination are openly disclosed, which apparently intends to issue a warning against North Korea as it no doubt prepared for launch an ICBM (intercontinental ballistic missile) and test nuclear weapons with President Biden’s visit to South Korea and his summit meeting with South Korean President Yoon Suk-yeol scheduled for Saturday in the lead.

A US Air Force-operated E-4B departed Joint Base Andrews in Maryland on Thursday night (KST) for Kadena Air Force Base on Thursday afternoon, a military aircraft tracking website reported Friday. It was deployed to Japan around the same time as Air Force One arrived at Osan Air Base in Gyeonggi Province, South Korea, with President Biden on board. The “nightwatch” aircraft supports operations involving all nuclear forces, including ICBMs, nuclear bombers and nuclear submarines, as well as ground, sea and air forces in the event of nuclear war . This explains why it is nicknamed “Doomsday Plane”.

The E-4B is equipped inside and out with innovative defense systems that protect electronic devices against a nuclear electromagnetic pulse resulting from a nuclear explosion. President Biden is on board in wartime, but it’s used in peacetime for the U.S. Secretary of Defense and Chairman of the Joint Chiefs of Staff to travel overseas. US Secretary of Defense Lloyd Austin caught the eye when he visited South Korea on an E-4B in March last year. “Exceptionally, the U.S. government is making an E-4B route open to the public during presidential travel outside the country,” a military insider said, interpreting it as a warning against Korea’s nuclear and ICBM provocations. of the North that could occur during President Biden’s trip to South Korea. and Japan.