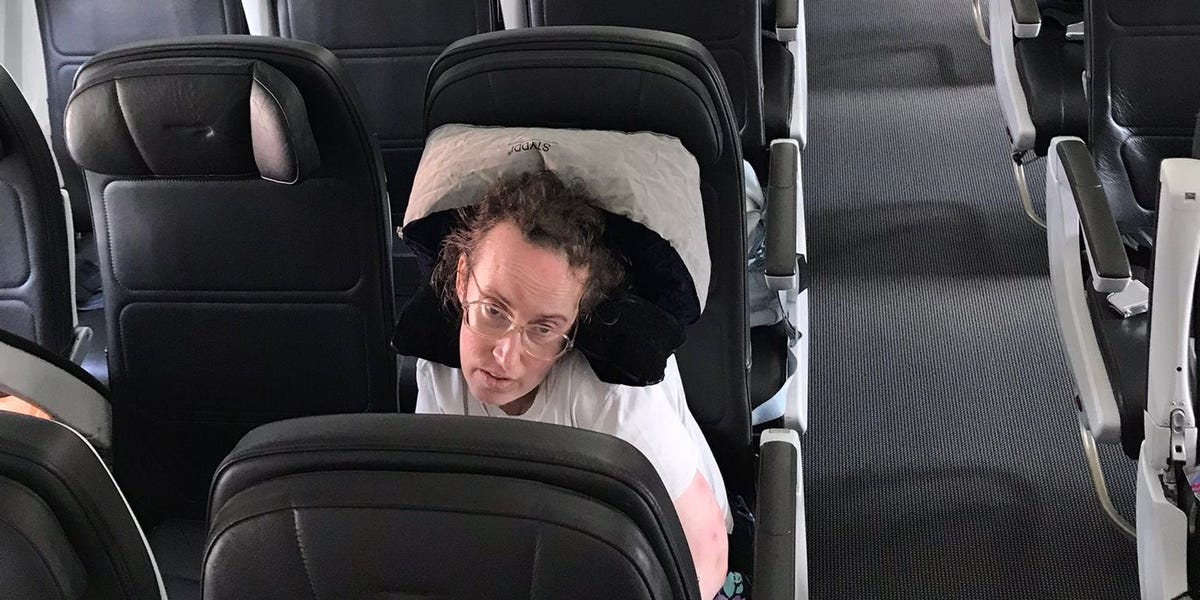 A person in a wheelchair was stuck on a plane for 95 minutes after airport staff failed to help him off the flight.

Victoria Brignell, 45, landed at Gatwick Airport on her British Airways flight from Malta on June 4. Paralyzed from the neck down, Brignell uses a wheelchair and knew there would be a short wait to get off the flight.

However, staff at Gatwick airport near London never arrived to get her off the plane.

Brignell explained to Insider that when a plane lands, she must be lifted from her plane seat into an aisle chair, a specialized wheelchair used to transport wheelchair users to the plane door. , then transferred to their wheelchairs.

“When I landed at Gatwick I was told by the crew that it would take staff 50 minutes to come off the plane. Later I was then told it would be another half hour in more.

“The airline staff were wonderful. They kept asking me if I was okay, they offered me drinks and they kept apologizing even though it wasn’t their fault. “, Brignell told Insider.

During the “frustrating” 95 minutes, Brignell was stuck in an awkward position with pillows to support her body and no bathroom to use, as commercial airlines don’t have accessible toilets.

Eventually Brignell and the British Airways staff stopped waiting and the crew helped her off the plane.

“As I walked away from the plane I saw all these poor passengers waiting at the gate who had been waiting for their flight for an hour and a half because I was stuck on the plane.”

“If you improve services for people with disabilities, you improve them for everyone, and you can see it here by the next 1.5 hour delayed flight.”

Brignell was accompanied on the flight with her carers and friend, Kevin Bonavia, who said: “Leaving disabled passengers stranded is shameful. I was shocked when the pilot first told us that Victoria should at least wait 50 minutes to get help. The excuse given the lack of staff was unacceptable and contingency plans should have been put in place.”

Gatwick Airport has since apologized for the incident. A spokesperson told Insider: “The treatment received at the airport was unacceptable. The chief executive and chief executive of Gatwick have both spoken and offered their sincere apologies to Victoria.”

The airport told Victoria that contractor Wilson James was managing staff who did not help her.

They told Insider: “We are deeply disappointed to have provided poor service on this occasion. While the aviation sector, in particular, is grappling with well-documented pressures, Ms. Brignell’s experience is unacceptable and falls far short of our values ​​and goals as a service provider; the Wilson James team sincerely apologizes. Wilson James and the airport are investigating the incident as a matter of priority.”

Not an isolated incident

Brignell said this was only the second flight she had flown on and she was put off the flight due to “horror stories” from other wheelchair users.

“I want to emphasize that this is not an isolated incident,” Brignell said.

She recalled the recently reported case of Daryl Tavernor, a wheelchair user who was left on a flight for two hours at Manchester Airport and eventually had to call the police for help off the plane.

Brignell had received support from fellow House of Lords Lady Tanni Grey-Thompson, who told Good Morning Britain that she was recently forced to crawl out of a plane when she was not helped to disembark.

Brignell is now calling for substantial changes in the airline industry to support passengers with disabilities.

“In the long term, we need to consider redesigning airplanes, so that we can travel in our wheelchairs.

“It will save me from needing staff to come and help me off the plane, it will make the journey much more comfortable for me, and thirdly, it will avoid the risk of my wheelchair going missing or being broken.”

I can travel with my wheelchair on a bus, train and taxi. Nowadays, I should also be able to fly in my wheelchair,” Brignell told Insider.