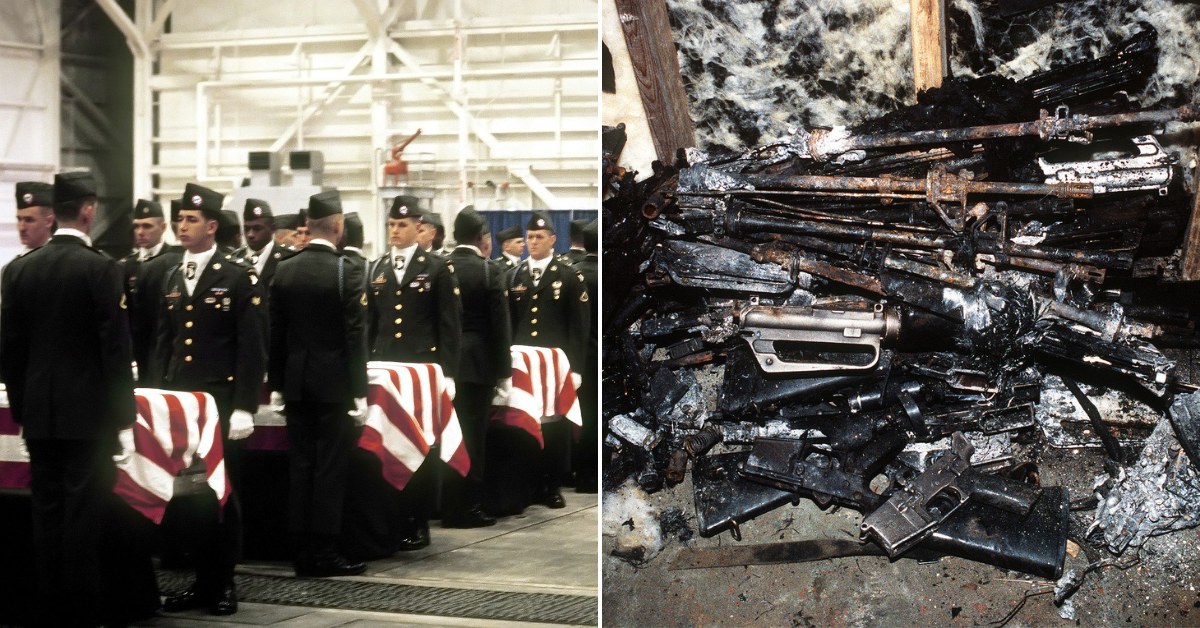 In December 1985, the 101st Airborne suffered its biggest one-day loss when a passenger plane carrying 236 members of the division crashed shortly after taking off from Gander International Airport in Newfoundland. The incident marked a deadly day in US military history and is remembered every year by the Screaming Eagles and those in the community in which the plane crashed.

Back from a peacekeeping mission

In 1985, the U.S. military participated in a six-month deployment to Egypt’s Sinai Peninsula as part of a Multinational Force and Observers (MFO) peacekeeping mission. The group consisted primarily of those serving with the 3rd Battalion, 502nd Infantry Regiment, 2nd Brigade, 101st Airborne, as well as 12 members of Criminal Investigations Command (CID) and Forces Command (FORSCOM).

They were due to leave Egypt in mid-December that year, some having swapped places with other servicemen who had young children and wanted to leave earlier, to get a head start on their Christmas holidays . The 248 boarded a Douglas DC-8-63CF airliner on the 11th, their final destination being Fort Campbell, Kentucky.

The plane crashes with members of the 101st Airborne on board

Flight 1285R took off from Cairo, Egypt at 8:35 p.m. on December 11, 1985. The return trip to the United States was to continue the next day, with refueling stops in Cologne, West Germany and Gander, Newfoundland, Canada. The DC-8 arrived in Cologne at 1:21 a.m. and departed just over an hour later with a new crew of eight.

At 9:04 a.m., they arrived at Gander International Airport, where those on board the plane disembarked while it was refueled and underwent an external inspection. At 10:15 a.m. it lifted off on runway 22, hitting the air at 192 MPH. According to witnesses, the DC-8 appeared to have difficulty taking off.

After reaching 198 MPH, the aircraft began to descend and was seen crossing the Trans-Canada Highway at very low altitude. Interviewed after the crash, witnesses reported seeing a bright glow from the DC-8 before it hit the ground near Gander Lake, after which it broke up and burst into flames. The fire was even more intense due to the extra amount of fuel the plane had carried.

Everyone aboard the plane, including members of the 101st Airborne, perished in the crash. At the time, it was the highest death toll of any accident involving a DC-8, until Nigeria Airways Flight 2120 crashed six years later while landing in ’emergency. To date, the death toll is still the highest of any plane crash in Canada and it is the deadliest aerial incident involving the U.S. military in peacetime.

Immediately after the plane crashed, the Canadian Aviation Safety Board (CASB) dispatched a response team to collect evidence that would help them figure out what had happened. At the conclusion of the inquest, five of the nine members of the jury concluded that as the DC-8 approached Gander, conditions were favorable for ice to form on the aircraft’s wings. He continued to be exposed to freezing precipitation on landing and had not been deiced before taking off for Kentucky.

Although the members were unable to determine the sequence of events leading up to the crash, they wrote in their report that “the weight of evidence supports the conclusion that shortly after takeoff, the aircraft experienced an increase in drag and a reduction in lift which resulted in a low altitude stall from which recovery was not possible They went on to say that the cause of the stall was ice contamination on the upper part of the DC-8’s wings.

Four members of the CASB disagreed, speculating that “an in-flight fire which may have resulted from detonations of undetermined origin caused catastrophic system failures” and brought the plane down. They also noted shortcomings with the recovered data. Justice Willard Estey of the Supreme Court of Canada ruled that the available evidence did not support either finding, leading to the closure of the CASB and the creation of the Transportation Safety Board of Canada.

On the day of the crash, an anonymous caller telephoned a French news agency in Beirut and claimed responsibility on behalf of the Islamic Jihad Organization. However, this was rejected by the Canadian and American governments.

The plane crash had a lasting impact on the 101st Airborne

A few days after the plane crash, US President Ronald Reagan and First Lady Nancy Reagan traveled to Fort Campbell to comfort members of the 101st Airborne and the families of those who had perished. Speaking to the group, he said: “Some people think the military are just warriors, fierce in martial expertise, but the men and women we mourn today were peacemakers. They were there to protect life and preserve peace, to act as a force of stability, hope and confidence.

After the recovery period, the bodies of the dead were flown back to the United States, escorted by their comrades from the 101st Airborne. Since the plane crash, a number of memorials have been erected to honor the victims, including one overlooking Lake Gander and another at Fort Campbell. A memorial park also opened in Hopkinsville, Kentucky.

Every year a memorial service is held in Gander for the 256 people who lost their lives. The event is broadcast live at Fort Campbell, so current members of the 101st Airborne can participate.

More about us: The Douglas SBD Dauntless changed the course of WWII in a single day

The crash of Flight 1285R was featured on a number of television shows during the year. Unsolved mysteries aired an episode about the incident, implying that it was related to the Iran-Contra affair and was caused by either an explosion, detonation or fire on the DC-8. Discovery Channel Help also covered the crash in a Season 11 episode titled “Split Decision”.