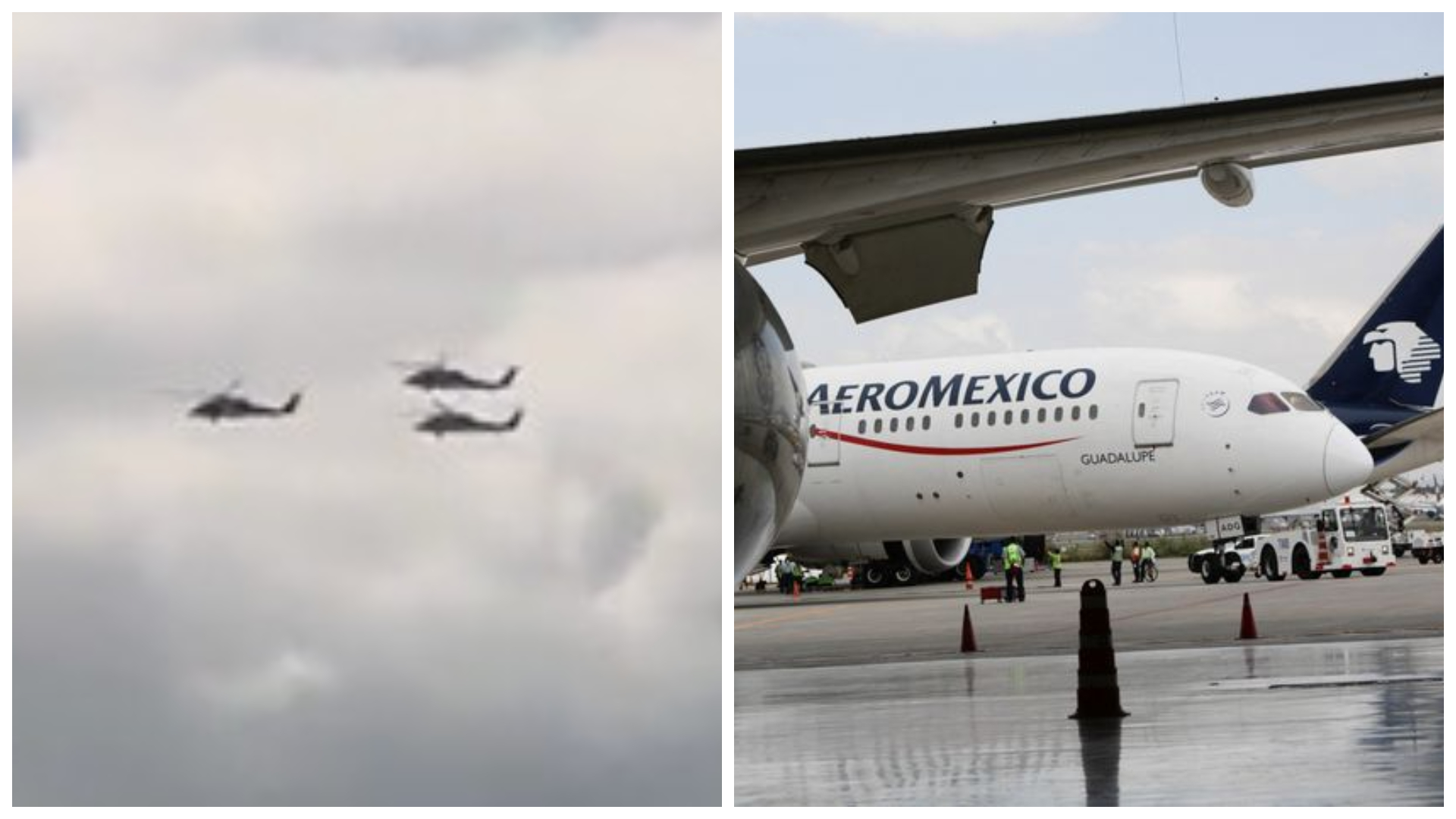 Danger to AIFA: a plane interrupted its takeoff due to air traffic from the new AMLO airport to Mérida according to passengers (VIDEO)

Video of an incident at AIFA circulates on social media due to aborted takeoff of a flight to Mérida, Yucatán

The passengers of Aeromexico flight 874, with the AIFA-Mérida connection, indicated that the control tower authorized take-off, while SENEAM ensured the opposite.

On social networks, passengers on a flight to Merida, Yucatan reported an incident to Felipe Angeles International Airport (AIFA) due to the interruption of the takeoff in the afternoon of this Wednesday, September 14.

Through his Twitter accountuser @ElPerro90543956 shared a video where three helicopters can be seen flying over AIFA moments before the Aeroméxico flight from CDMX took off in Mérida.

“Incident of AIFA Aeroméxico flight 874 to Mérida. Takeoff aborted in full takeoff the plane is moored at the end of the runway to see helicopters at the end of it. Pilot explains that they are rehearsing, ”wrote the user.

Was the AIFA flight to Mérida canceled due to helicopter tests?

The interruption of the Aeroméxico 874 flight to Mérida was due to the alleged repetition of the military helicopters that will take part in the Military parade on September 16 in Mexico Cityaccording to the user.

According to information from the journalist Manuel Lopez San Martinthe Control Tower authorizes the plane to take off despite the presence of the helicopters, but the pilot interrupts it when he sees the plane.

In the video circulating on social networksthe pilot explains that he must wait for the plane’s brakes to cool before taking off, in addition to thanking the passengers for their patience.

“Ladies and gentlemen, our whole system is fine, we’re just going to wait for our brakes to have the right temperature to take off, right now they’re hot […] to be able to safely resume takeoff,” Aeroméxico staff said. .

AIFA authorities did not issue any statement on the incident of the flight to Mérida on Wednesday.

Felipe Angeles International Airport (AIFA)located 50 km north of Mexico City, is the new aerodrome called upon to solve a saturation problem which has dragged the huge city for two decades.

It is also one of four emblematic works in the infrastructure of President Andrés Manuel López Obrador ( AMLO ), as well as a refinery, a tourist train and an interoceanic corridor.

But since its very conception, AIFA has surrounded itself with skepticism airport specialists, against whom the president has been fighting for four years.

And it is that for its construction, López Obrador took the controversial decision – which he submitted to popular consultation – to cancel the construction of another airport it was already 30% complete.

This resulted in a huge expense in compensation which the President and his team felt was preferable to investing resources in a “bottomless barrel” like this airfield, which they claim would also cause flooding problems for the city and ecocide on the spot. of your building.

Instead, he opted for a more austere project, but located at a point far from the capital, making it unlikely that Mexico would have a “hub”, or center of high-capacity air operations, as we thought so with the canceled project. .

Here are some of the controversies surrounding AIFA at its inauguration

For 20 years, in Mexico, we have known that there is a problem of saturation of the air service of the Mexican capital, explains to BBC Mundo the analyst Raymundo Tenorio, professor emeritus of economics.

The government at the time was exploring a project to provide a solution to the growing demand for arrivals and departures at Mexico City International Airport (AICM), which was reaching its maximum capacity of 32 million passengers a year.

President Vicente Fox ordered the construction of an airport, but his poor planning was met with opposition from affected residents of the municipality of San Salvador Atenco.

The protests were brutally suppressed by federal police, an episode that resulted in several deaths, sexual abuse and human rights violations, as documented by the National Human Rights Commission.

“There was a social uprising. Due to the protest uprising of these citizens, the project was not carried out,” Tenorio recalls.

Therefore, the AICM continued to support more passengers, until a new initiative by President Enrique Peña Nieto proposed a solution: to create an airport platform in federal territory, without affecting local farmers. .

The New Mexico International Airport (NAIM) would become the main logistics center for passengers and commerce in the country, although to build it would require an investment of some US$13,000 million to adapt the land, which was the extinct Lake Texcoco, east of CDMX.

But social and political changes have once again turned things upside down.

Citizens elected with a overwhelming majority (53% against 22% in second place) President López Obrador, who since his campaign has had austerity and the fight against corruption as flags.

Therefore, his political platform aimed at eliminating the “pharaonic” airport of Peña Nieto and create a more austere one at the Santa Lucía military air base.

“Until 2018 [the NAIM] went very well, with a 30% documented progress in an OECD (Organization for Economic Co-operation and Development) report,” Tenorio explains.

Criticism from analysts immediately came in for the decision which not only represented a halt to work in progress, but also meant a huge expense due to the cancellation.

The dispute over the actual cost of the decision to Mexicans is contentious.

The Superior Court of Accounts of the Federation, an autonomous government control body, has presented various calculations in recent years. The most recent indicates that the cost of cancellation was slightly higher 9 billion US dollars .

The López Obrador government says it actually only spent $5 billion.

But Tenorio argues that, taking into account the costs of compensation, bonds, interest on debt and projected payments until 2034, they amount to almost 21 billion US dollars, that is, a sum greater than the cost that the first phase of NAIM would have to start operating. .

“The reaction from the OECD, the World Bank, the Inter-American Development Bank and business leaders was that the possibility of having great potential for logistics, tourism, sources of work, was destroyed”, explains Tenorio.

The government, however, says critics of the decision do not consider NAIM consume more and more public resources cause flood closing off the rainy season water discharge area that was there, and kill the species from the neighboring lake of Nabor Carrillo.

Although López Obrador expressed for a decade his distrust of the armed forces in charge of civilian tasks, such as public security, when he took office he turned his vision 180° and entrusted the armed forces with its main national projects. .

The planning and execution of the work of the new AIFA was carried out by the Armed Forces expressly, in less than three years.

And in parallel, groups of specialists have broken down technical skepticism about its operation, with many analysts claiming that the operation of the old AICM was “incompatible” with the AIFA, which was resolved with a airspace reconfiguration .

In terms of money, however, the budget had to be increased at least twice.

“According to the amount of money that has been earned, both from the expenditure budget and reports from the Federation’s Supreme Audit Office, what has been spent at this airport is 125,000 million pesos, not 75,000 [US$6,250, US$3,750]stresses Tenorio.

“And 83% of the civil engineering works contracts, materials, equipment, etc., have been awarded by direct reward to suppliers, not by competition as dictated by best practices,” he adds.

In addition, the project has been classified as a national security work, which makes it difficult to control the use of public resources.

However, López Obrador insisted that it is an exemplary work, which was built with less than half the cost of NAIM.

4. An empty and distant airport

What is indisputable for anyone are two facts: AIFA begins its operations this Monday with little scheduled flights and it is located in a remote point of difficult access that few want to achieve.

On the one hand, only two low-cost companies (Volaris and Viva Aerobús) will operate domestic flights. The government hopes that more companies, like Aeroméxico, will take their flights to this terminal, which has a capacity of almost 20 million passengers a year.

This would ease the burden of nearly 54 million users on the current AICM.

“NAIM could have generated 1,400 operations on the three runways it would have on the first day of operation. And now what we are going to add to the 800 the day-to-day operations of the IMCA are 8 operations day one,” Tenorio points out.

On the contrary, the López Obrador government points out that the NAIM was already dragging a delay that would take its inauguration until 2023 and that its entry into service meant the closure of the AICM and the Santa Lucía air base.

Concerning the works of the airport themselves, the criticisms on its architectural design or its functionality have been diluted as the government has presented its advances.

Many potential AIFA users have complained about the long distance, which can exceed two hours in a high-traffic area, and the high cost of a taxi or carpool to access the terminal.

2022-09-15
Previous Post: Queen Elizabeth’s last flight was the most-watched plane ever
Next Post: Plane crash that kills every day: Fentanyl overdoses by the numbers, latest data from federal government