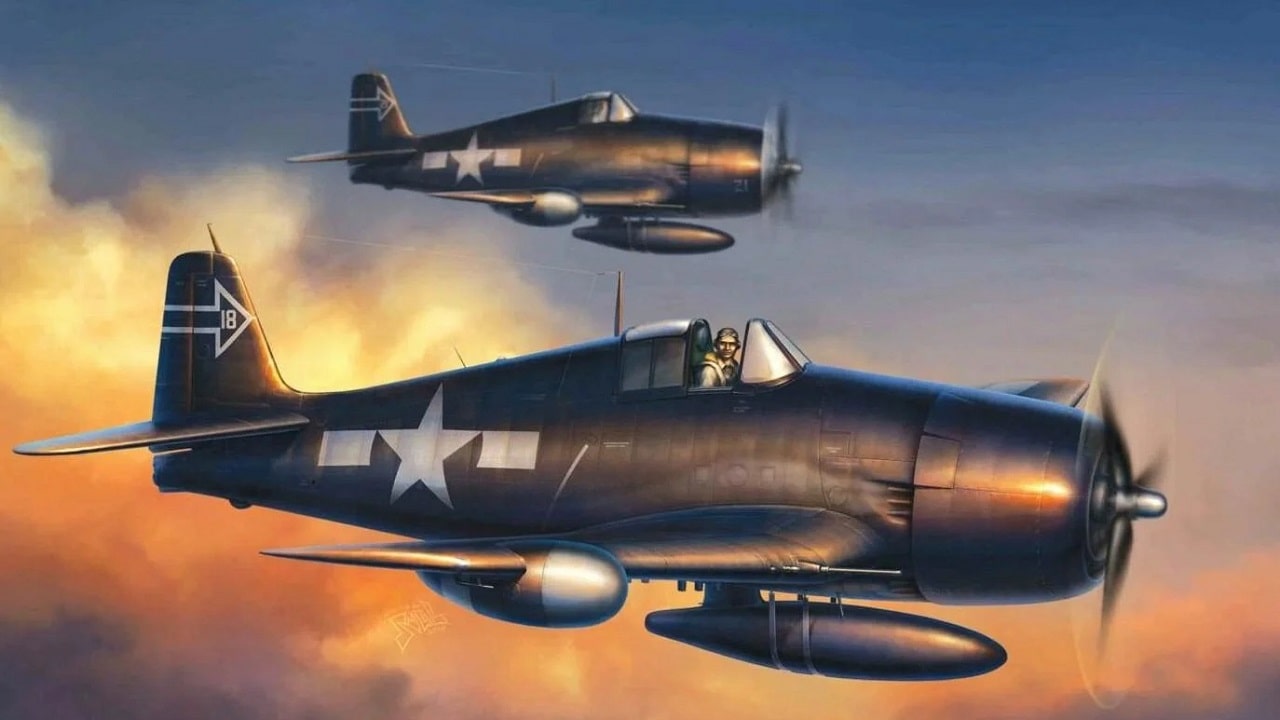 Grumman F6F – The best fighter plane of WWII? Designed to replace the older F4F Wildcat and counter the Japanese Mitsubishi A6M “Zero”, the Grumman F6F became the US Navy’s dominant fighter during the second half of World War II. It proved powerful and pugnacious and was arguably one of the few aircraft in aviation history to be perfect from the start.

Design work began right after Pearl Harbor, and the aircraft required little testing or follow-up development before being rushed into production. The exceptional fighter was mass-produced at a rate unmatched by any other aircraft manufacturing program, and the F6F Hellcat helped turn the tide against the Japanese during the Pacific War.

The XF6F-1 prototype first flew on June 26, 1942. Just over a year later, in September 1943, while operating from the light aircraft carrier USS Independence (CVL-22), the Hellcats won their first victory – shoot down a Kawanishi H8K “Emily” seaplane. Swarms of burly, brilliant blue-painted fighters quickly wrested control of the Pacific skies from the previously dominating Zero and proved essential in the island-hopping campaign.

A total of 12,275 Hellcats were manufactured by Grumman between June 1942 and November 1945 at Grumman Aircraft Engineering Corporation at Bethpage on Long Island in New York. It was the largest number of fighter aircraft ever produced in a single installation, and this almost did not happen. Factory space at Bethpage was insufficient to meet the demands of the war effort and in the spring of 1941, Grumman bought thousands of steel beams from the dismantled New York “El” Second Avenue (elevated railroad) as well as the World’s Fair pavilion to help expand the production facility.

Hellcats were credited with destroying a total of 5,223 enemy aircraft while in service with the US Navy, US Marine Corps and Royal Navy Fleet Air Arm (FAA) – more than any other aircraft allied naval. Additionally, of the 6,477 aerial victories scored by US Navy pilots during World War II, 4,947 were attributed to F6F Hellcat pilots.

The Grumman F6F Hellcat is not generally known for the role he played in the European theater of operations, but the aircraft saw limited action during the Allied landings in southern France in 1944; and in a famous aerial engagement, four Hellcats managed to shoot down three German Heinkel He 111 bombers.

The British government also purchased nearly 1,100 aircraft, which were renamed Grumman Marlets, and the aircraft were first used in combat in April 1944 – in an environment far removed from the familiar Pacific climates of the F6F. A group of Royal Navy Marlets attacked the German battleship Kriegsmarine (Navy) Tirpitz in Kaafjord, Norway. Although the attack did not sink the battleship – it took Royal Air Force Lancaster bombers to complete the job in November 1944 – the Hellcats helped keep her out of commission.

The F6F Hellcat turned out to be one of the few aircraft that was from the start. The mighty fighter was also one of the few combat aircraft developed after the outbreak of war to achieve such success. It was a big, heavy machine at a time when experts were touting the merits of small, light fighters.

The Hellcat was fast and nimble enough to dominate as a fighter in the Pacific War, while pilots praised the F6F’s ability to sustain damage that would down lesser fighters. It’s easy to see how it gained the reputation of being a product of the “Grumman Iron Works”, as those who flew the fighter knew that taking battle damage no longer meant certain death.

Today’s editor for 1945, Peter Suciu is a Michigan writer who has contributed to more than four dozen magazines, newspapers, and websites. He writes regularly on military hardware and is the author of several books on military headgear, including A gallery of military hairstyles, which is available on Amazon.com. Peter is also a Contributing author for Forbes.