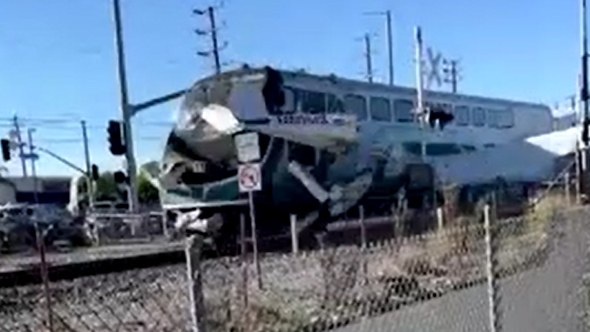 (NewsNation Now) – Los Angeles police removed the pilot from a Cessna that crashed seconds before the plane was hit by a train on Sunday, sending debris flying in all directions.

The Cessna 172 crashed around 2:10 p.m. shortly after takeoff from Whiteman Airport in the San Fernando Valley community of Pacoima, according to the Federal Aviation Administration.

19 dead, including 9 children, in a violent fire in the Bronx

Dramatic video sequence posted on Twitter by the Los Angeles Police Department shows several officers freeing the man from the downed plane. The officers and pilot are only yards from the tracks when the passing train destroys the plane.

The department applauded its officers, saying in the tweet that they “showed heroism and quick action in saving the life of a pilot who made an emergency landing on train tracks.”

“The plane missed takeoff and landed on the train tracks at a popular intersection,” said Luis Jimenez, the 21-year-old music composer who filmed the video. “Seconds before impact, officers rescued the pilot and a piece of debris nearly hit me.”

The pilot was treated for cuts and bruises and is in stable condition, according to KTLA. No one on the train was injured.

The condition of the pilot, the only person on board the plane, has not yet been disclosed.

NewsNation affiliate KTLA and Reuters contributed to this report.

Disclaimer! NewsConcerns is an automatic aggregator of all the media in the world. In each content, the hyperlink to the main source is specified. All trademarks belong to their rightful owners, all materials to their authors. If you are the content owner and do not want us to publish your materials, please contact us by email – [email protected]. Content will be deleted within 24 hours.
2022-01-10
Previous Post: In the air! How to capture great airplane photos
Next Post: X Plane 12 – Everything We Know So Far, Trailers, Release Date, New Screenshots