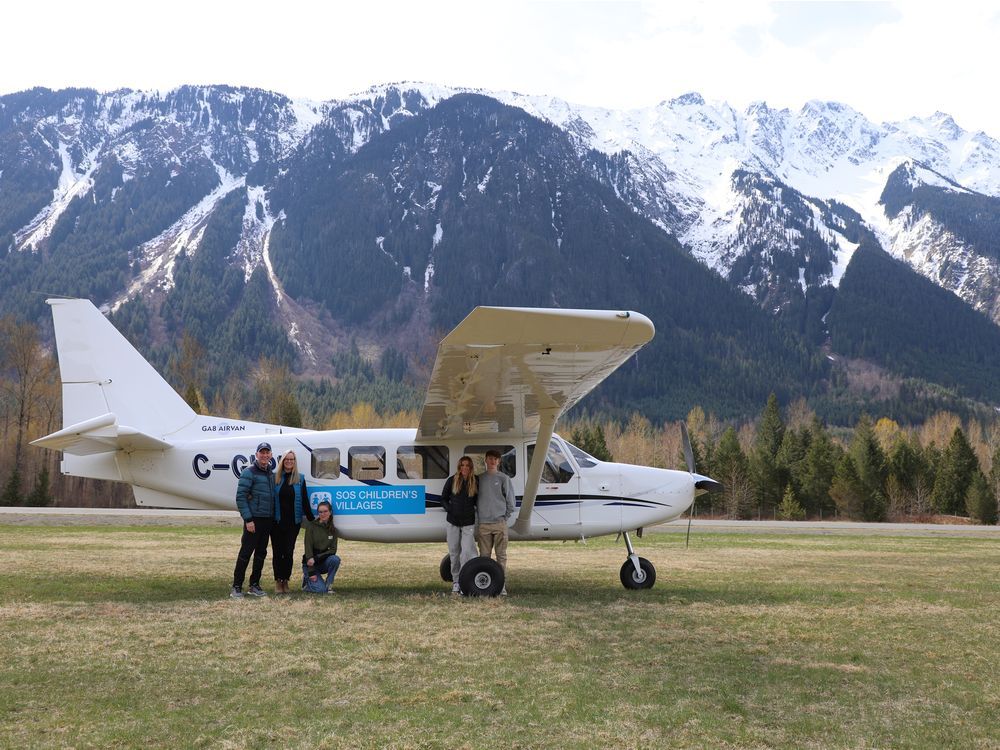 Summer is coming, it will soon be time to throw all the gear in the van, make sure everyone is strapped in and go on an adventure as a family.

Only you’re not hitting the road, your van is a GA8 AirVan, a single-engine aircraft that will transport you to five continents on a 22-month world tour, while raising funds and awareness for a charity that s takes care of orphans and abandoned children.

The goal is to raise $1 million during the expedition for SOS Children’s Villages, Ian Porter, 59-year-old father and chief pilot, said. Lesser known in Canada than elsewhere, the charity provides safe homes for 80,000 orphaned or abandoned children in 130 countries, providing them with shelter, food and a mother to care for them.

Porter has already flown a few fundraising flights, one around the tip of South America and one around Alaska.

“I guess on my to-do list I’ve always flown around the world,” he said. “And I always thought, wouldn’t it be great to be able to spend more time when you go to these great places and you fill up on gas and go.

“And it wouldn’t be great to have the rest of the family with you.”

These concepts coalesced into this one idea, so he approached his wife Michelle: Time flies, he says, the kids are growing up, they’re going to leave and get a job, get married.

“There’s a limited time to do another cool thing, so how about we take a year off and fly around the world.”

Michelle was all for it and they discussed it with Chris, 14, Sydney, 17 and Samantha, 21.

“They all thought about it and said ‘yes’.”

Porter has been flying since he was a teenager, and the timing of their scheduled departure in June for their first leg across the Americas couldn’t be better, he said.

Sydney and Samantha are pilots themselves – both started lessons and got their licenses at the same time.

Samantha, a third-year geography student studying environment and sustainability at UBC, has just completed her final final exam of the semester and can gain experience working in the field before returning for her fourth year. .

For Sydney, it will be a gap year like no other, and both girls will be co-piloting and sailing.

Chris will complete his 10th year online during the circumnavigation.

In the air, her responsibility is to make sure there’s always a working radio frequency and the satellite tracking is working properly, while helping her mother figure out the logistics of where to stay when they land. .

“It’s going to be amazing,” Chris said, a sentiment shared by his sisters. “We go around the world, it’s crazy. All the different experiences and all the different countries that I’m going to see, I’m so excited.

“Many more people have successfully climbed Mount Everest than have flown a single-engine aircraft around the world.”

And most flights around the world take the most direct route possible, often with long-range temporary auxiliary fuel tanks for long ocean crossings.

Most are also met under instrument flight rules, which means the aircraft can rise above the weather conditions and fly aloft for a long time.

“Flying a single-engine aircraft around the world with a family of five on board, maintaining visual reference to the surface at all times, has perhaps never been done before.”

There aren’t many single-engine aircraft capable of carrying out an expedition like this, Porter said, and he thought a lot about it before settling on the Gippsaero GA8AirVan, an Australian aircraft designed for use in remote areas with sketchy airstrips. It can cruise at 125 knots (220 kilometers per hour) for up to five hours and climb to 20,000 feet.

Initially, the crew planned to head east for the first leg of the journey, but Russia’s invasion of Ukraine put an end to that, so Europe and Asia will now be the second stage, with time in the airspace over India and Egypt, although there is still a tiny bit of Russia that the porters will have to fly over before they can fly to Japan then Alaska.

And while the circumnavigation will be a once-in-a-lifetime adventure for the family, they’ve been traveling in droves since the kids were babies.

“I’ve traveled and been on some absolutely amazing vacation expeditions, we’re so lucky to have adventure-loving parents,” Samantha said. “I learned different perspectives, different cultures from different people.”

The family planned the trip as safely as possible, with the latest high-tech electronics and survival gear, including a raft. Giving yourself 14 months also allows for the flexibility to go on flights only when weather conditions and other factors allow it to be done safely.

Personal possession will be limited to 10 kilograms each.

“They are doing amazing humanitarian work and they need our help.”

More news, less ads: Our in-depth journalism is possible thanks to the support of our subscribers. For just $3.50 a week, you can get unlimited, lightweight access to the Vancouver Sun, The Province, National Post and 13 other Canadian news sites. Support us by subscribing today: The Vancouver Sun | Province.

Sign up to receive daily news from the Vancouver Sun, a division of Postmedia Network Inc.

The next issue of Vancouver Sun Headline News will soon be in your inbox.