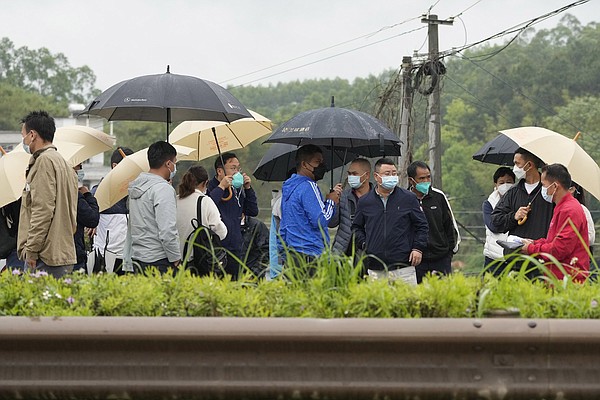 WUZHOU, China – Investigators have found what they believe to be the cockpit voice recorder in the wreckage of a China Eastern flight that crashed in the south of the country with 132 people on board, a said a Chinese aviation official on Wednesday.

The outer casing of one of the two “black boxes” on board the plane and its storage element were both damaged, but the unit is “relatively intact”, said Zhu Tao, director of the Bureau of aviation safety from the Civil Aviation Authority of China. told reporters.

The recorder will be sent to Beijing for decoding and analysis, Zhu said. How long that will take depends on the degree of damage to the unit, he said.

“This will provide important evidence as to the cause of the crash,” he said. Investigators will then “continue to make every effort to find the flight data recorder to provide even more comprehensive data support to reconstruct the entire incident,” he said.

The recovery of the so-called black boxes is considered essential in determining the cause of the crash. They are usually located in the tail area, where they are less likely to be damaged in a crash.

The search for clues as to why the airliner suddenly plunged and crashed into a mountain in southern China on Monday afternoon had to be temporarily suspended earlier on Wednesday as rain smoothed out the debris field and filled the gash with red earth formed by the plane’s fiery impact.

Wallets and ID and bank cards were found, and human remains were also recovered on Wednesday, Zheng Xi, chief of the fire and rescue department of the Guangxi Autonomous Region where the plane crashed.

“With the rain, visibility was poor, introducing some degree of difficulty in the rescue operation,” Zheng said.

Researchers use hand tools, including metal detectors, as well as drones and sniffer dogs in rainy conditions to comb the heavily forested slopes. Crews also worked to pump water out of the pit created when the plane hit the ground.

The flight data recorder captures information about aircraft speed, altitude, up or down direction, pilot actions and the performance of all key systems.

“This is invaluable information, especially since this crew apparently failed to communicate [with air traffic controllers] going down,” said John Goglia, former member of the U.S. accident investigator, National Transportation Safety Board. “Hopefully they get a good voice on that recorder, because it will tell us exactly what was happening in the cockpit. “

Officials said the crew members were in good health, the plane had an impeccable maintenance record, the weather had been good during the flight and the pilots had been in regular communication with air traffic controllers. before diving.

China Eastern Flight 5735 was carrying 123 passengers and nine crew from Kunming in Yunnan province to Guangzhou, an industrial hub on China’s southeast coast, when it crashed on Monday afternoon at the outside the city of Wuzhou in the Guangxi region. All 132 people on board are presumed killed.

An air traffic controller tried to contact the pilots several times after seeing the plane’s altitude drop sharply, but got no response, Tao said on Tuesday.

Information for this article was provided by Yu Bing, Caroline Chen, Chen Si, Olivia Zhang and David Koenig of The Associated Press.

2022-03-24
Previous Post: Searchers find wing and engine parts at tragedy site
Next Post: The Patriots provide a team plane to fly fans from Providence to Chicago for Friday’s NCAA Midwest Regional Semifinal against No. 1 Kansas