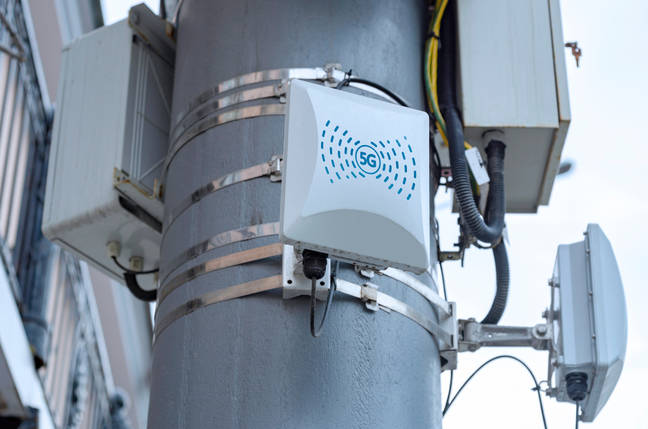 AT&T and Verizon have agreed to further delay the U.S. rollout of their previously delayed 5G C-band wireless service just a day ahead of its scheduled launch date.

On December 31, 2021, US Transportation Secretary Pete Buttigieg and Federal Aviation Administration Chief Steve Dickinson sent a letter [PDF] to AT&T CEO John Stankey and Verizon CEO Hans Vestberg warning of chaos in the travel industry if aviation industry concerns about 5G interference with aircraft equipment are not resolved by Wednesday, January 5, 2022 – the date on which both companies have previously said they will start using the C-band spectrum.

The FAA based its concern on an October 2020 report [PDF] of the Radio Technical Committee for Aeronautics (RTCA) which found “a major risk that 5G telecommunications systems in the 3.7-3.98 GHz band [used by 5G C-band] will cause harmful interference to radar altimeters on all types of civil aircraft.

The letter proposes a framework whereby commercial C-band service can begin as planned, except around major airports, to be identified by the FAA. The service around these priority airports would be put in place by the end of March 2022, barring unforeseen technical problems.

AT&T and Verizon previously planned to make their respective 5G services available in the United States last December, but delayed the launch of their services as talks with the FAA continued.

Telecom operators are not happy

On Sunday, Stankey and Vestberg dismissed concerns raised by Buttigieg and Dickinson. In a joint response obtained by the New York Times [PDF], said the two CEOs, although they care deeply about the safety of their customers, employees and families, “the question of whether 5G operations can safely coexist has long been settled.”

The response letter argues that “radio altimeters do not operate on or near C-band frequencies,” noting that altimeters operate in the 4.2-4.4 GHz frequency band. The spectrum of the C band covers 3.7-3.8 GHz.

He then berates the federal government and the FAA for waiting until November of last year to start collecting elevation data and for asking the two companies to make additional accommodations just five days before their planned deployment of 5G – for which the wireless industry paid $ 80 billion in spectrum fees last year.

“Accepting your proposal would not only be an unprecedented and unwarranted bypassing due process and carefully crafted checks and balances in the fabric of our democracy, but an irresponsible abdication of the operational control required to deploy world-class and competitive communications networks. globally that are just as essential to our country’s economic vitality, public safety and national interests as the airline industry, ”the CEO letter states.

In concession, the two business leaders said they would adopt C-band signal level reduction zones similar to those put in place around airport runways in France – where 5G service currently coexists with the aviation – until July 5, 2022.

On the same day, the FAA published A declaration indicating that the mobile operators’ proposals were under consideration as the agency tries to find a way for 5G C-band service to work without compromising aviation safety. The agency said that even if the situation was not resolved, it could issue advisories to air missions (NOTAM) that restrict aviation to areas where 5G interference is possible.

Obviously unwilling to take responsibility for canceled flights and stranded travelers, AT&T and Verizon said on Tuesday they would accept a brief delay.

“At the request of Secretary Buttigieg, we have voluntarily agreed to an additional two weeks of our rollout of 5G C-band services,” an AT&T spokesperson said in a statement provided to The register.

“We also remain committed to the six-month protection zone mitigation measures that we outlined in our letter. We know that aviation security and 5G can coexist and we are confident that continued collaboration and technical evaluation will solve all the problems. “

“We have agreed to a two week deadline that promises the certainty of bringing our revolutionary 5G network to this nation in January, delivered over America’s best and most reliable wireless network,” said a spokesperson. word of Verizon. The register in an email.

Captain Joe DePete, president of the Air Line Pilots Association (ALPA), welcomed the delay in an emailed statement to The register.

“It is clear that this irresponsible 5G deployment was not ready for takeoff, and that is why US Secretary of Transportation Buttigieg, ALPA and other frontline aviation workers and stakeholders have called delay in implementation, ”he said. “We are pleased that Verizon and AT&T were listening to the flight crew safety instructions.”

“Now the real work begins. We hope this delay will allow the wireless industry and the entire aviation community to work together on effective solutions that will ensure that every passenger and cargo flight arrives safely without serious disruption to flight operations. “®