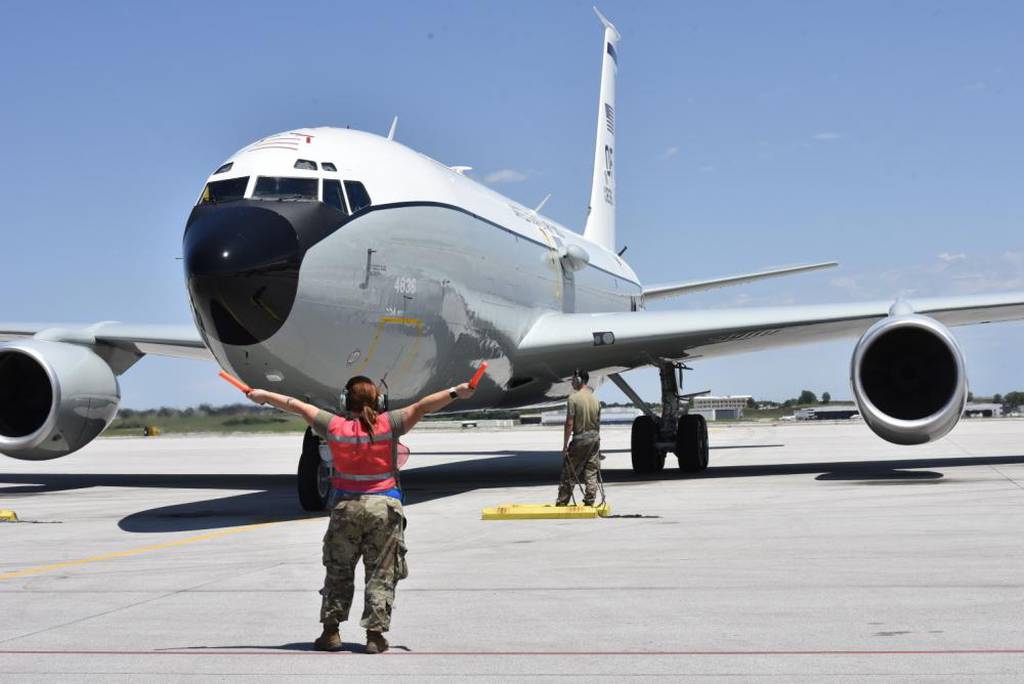 Aircrew from the 55th Wing at Offutt Air Force Base in Nebraska feasted last week on something they almost never see: a new aircraft.

The WC-135R “nuke-sniffer” jet that landed July 11 at Lincoln Airport – the 55th’s temporary operating base while Offutt’s runway is replaced – was actually built in 1964.

But the former New Hampshire Air National Guard aerial tanker has been refitted with new equipment capable of detecting atmospheric radiation and updated with modern “glass cockpit” controls. And it has the same newer, quieter turbofan engines as the rest of Offutt’s RC-135 reconnaissance fleet.

“We have a jet here that the Air Force has never seen before,” Lt. Col. Chris Crouch, commanding officer of the Offutt-based 45th Reconnaissance Squadron, said in a 55th Wing press release. “We’ll have a lot more range to get to areas of operation than we’ve ever been able to reach before.”

It is the first of three refurbished National Guard KC-135s scheduled for delivery to the 55th Wing over the next year. All will fly as part of the Constant Phoenix mission, collecting and analyzing air samples in support of the 1963 Limited Nuclear Test Ban Treaty.

The mission dates back to the Cold War era. Its importance has grown as tensions with Russia rise and North Korea steps up its missile testing program with a series of launches this year.

During the conversion, the long refueling ramps are removed from the tankers and the aircraft’s avionics and flight systems are upgraded to match other 55 Wing aircraft.

They are also equipped with small detection pods on each side of the fuselage, above the wing. Filters inside the pods capture tiny particles from a nuclear explosion, giving analysts important information about the composition of the bomb or radiation source.

The work is being done in Greenville, Texas by the 645th Aeronautical Systems Group, long known by its nickname “Big Safari.”

The three new planes replace two decrepit WC-135s that have seen few upgrades since Boeing built them in 1961 and 1962 and which in recent years have been notorious “hangar queens”.

One of the planes, a WC-135C with tail number 62-3582, was retired in November 2020 in a tongue-in-cheek retirement ceremony before being sent to a desert junkyard in Arizona. Crew members described maddening breakdowns and harrowing flights aboard an aircraft that the 45th Reconnaissance Squadron chaplain dubbed “Lucifer’s Chariot.”

The second, a WC-135W with tail number 61-2667, will continue to fly for a few more months. But he has one of the worst maintenance records in the Air Force.

In fiscal year 2021, the aircraft had a 48% “mission capability” rating, according to Air Force data published by the Air Force Times, meaning it was capable of complete scheduled missions less than half the time. And it had a 47% breakage rate, meaning it returned from almost half of its missions requiring major repairs. Early last year he was sidelined in Australia for almost two months due to hydraulic problems.

At the urging of Bacon and Nebraska Senator Deb Fischer, Congress approved $218 million in 2019 and 2020 to refurbish the three Constant Phoenix mission planes. The decision also follows a series of World-Herald investigations, titled “In-Flight Emergency,” in 2018 that highlighted maintenance issues with the 55th Wing’s fleet of C-135 variants.

“Before, we had to have a special group of very experienced crews that could fly these old little engines and work out some of the issues they were having,” Crouch said in the 55 Wing release. “Now we have a beautiful, reliable, updated jet that we can fly any pilot, co-pilot and navigator on.”

Delivering new and even refurbished aircraft is a rare event for 55 Wing. The last refurbished planes arrived in the mid-1990s, said Robert Hopkins III, a former RC-135 pilot who is now a Dallas-based Air Force reconnaissance historian.

The last new aircraft were the RC-135 variants delivered in 1967 for several missions, including Rivet Joint and Cobra Ball. Many of them are still flying.

“This is a monumental moment for us,” 55 Wing Commander Col. Kristen Thompson said in the press release. She called the WC-135 delivery a “game changer”.

The next WC-135R is expected to arrive in winter, according to the press release, and the third jet is expected in summer 2023.

2022-07-19
Previous Post: CAE plans to electrify popular single-engine Piper aircraft
Next Post: The investigation into the fatal plane crash in the Didsbury area is ongoing