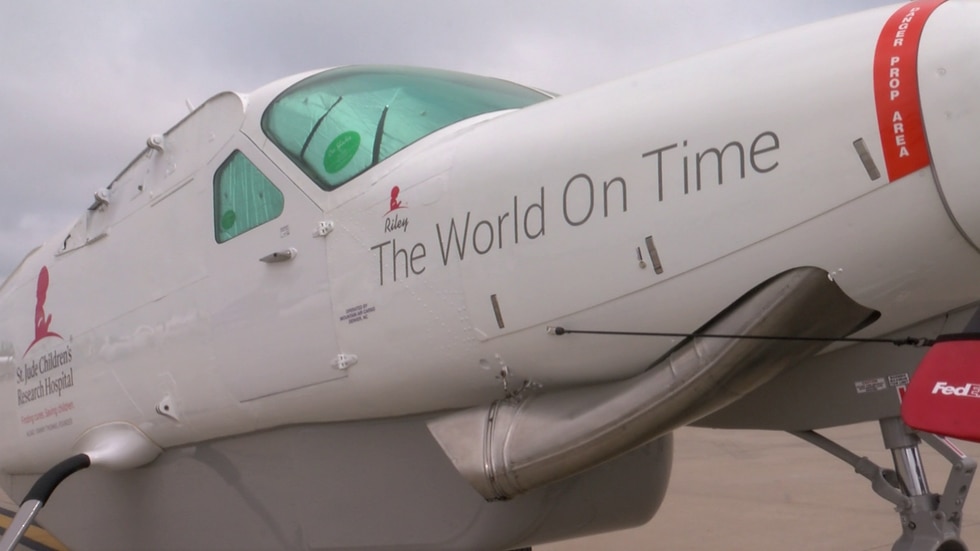 A former St. Jude patient gets a glimpse of the plane that bears his name

MEMPHIS, Tenn. (WMC) — You may have wondered why traffic was moving so slowly on I-240 eastbound Wednesday morning.

That’s because a special centerpiece was flown to TPC Southwind for the Fed Ex St. Jude Championship Golf Tournament.

Riley, 5, was on hand to get a glimpse of the plane ahead of the official unveiling next week.

The plane is named after a former St. Jude patient, Riley, who was diagnosed with acute lymphoblastic leukemia three years ago when he was just 18 months old.

“I noticed Riley was a little picky, but not himself, so I took him to the doctor. And the doctor said he had an ear infection,” the mother said. Riley, TaylorRaney.

This diagnosis later turned into cancer.

“Definitely a whirlwind for sure, a whirlwind of emotions, and what’s the next phase? What do we do next,” Riley’s father Brennan Raney said.

St. Jude Children’s Research Hospital was next, and after more than two years of intensive treatment, Riley’s parents say he is doing great.

“You can never tell something was ever on its way,” Taylor Raney said.

On Wednesday, Riley got a glimpse of what thousands of golf fans will soon see on display at TPC Southwind, the FedEx St. Jude Purple Eagle aircraft bearing his name.

Let a logistics company handle all the heavy lifting; after Riley’s family got their first taste of FedEx Corporate Aviation,

the wingless bird was escorted by police down I-240 to Winchester en route to the golf course.

Once on its own pad, crews set to work reassembling the aircraft for display.

“I hope Riley grows up to appreciate what everyone has done for him,” Riley’s grandmother Kim Raney said. “I hope he pursues his dreams,” Raney said.

Each year, a patient at St. Jude’s Research Hospital with a FedEx connection is honored with the Purple Eagle presentation.

Riley joins nine other past recipients who will all return to the FedEx St. Jude Championship for a special celebration.

“Well, we started small ten years ago. And you know, again, it was up to the kids to educate the hospital,” said Bill West Jr, vice president of supplemental air operations at FedEx Express.

“Just the fact that they all come back. It’s really kind of a miracle,” West said.

West has been there from the very beginning; reaching the 10th plane is something special.

Raising awareness of a hospital that has changed so many lives, like Riley’s – whose name will hopefully inspire others for years to come.

Riley’s aircraft will carry his name under the St. Jude Children’s Research Hospital logo for the aircraft’s lifetime.

There are nearly 300 refueling turboprop planes in the FedEx Express fleet, but only 10 are named after former St. Jude patients.

Click here to point out a spelling or grammatical error. Please include the title.